As talk of a possible fiscal stimulus continues, the descended to two-year lows and rates eased slightly this morning on investor hopes of new cash being sprinkled into the economy from Washington, D.C.

This stimulus talk, which goes in and out like a radio broadcast you can sometimes hear and sometimes can’t, could be why the dollar came under pressure. A weaker dollar sometimes helps multinational stocks—especially in Tech—by making their products cheaper for overseas customers. However, at least for now the market doesn’t seem to be building on Tuesday’s record close.

That’s despite more good news early in the day when U.K. health officials approved Pfizer (NYSE:) and BioNtech’s (NASDAQ:) coronavirus vaccine. The dropped just a bit but remains above 0.92%. It looks like yields might also be closely tied to stimulus hopes, so any developments in Washington might be worth watching. Investors are also counting down the days to the November payrolls report, due Friday (see more below).

It’s hard to get too worked up about the market’s early weakness today, considering we’re coming off record closes for two of the three main indices. This run since the election has been incredible, and the pattern recently has often been one where the market starts down a little but slowly gains traction through the session. Talk of a stimulus, by the way, highlights the disconnect between Wall Street and Main Street. Stocks are at all-time highs but there’s still a need to jumpstart the economy, an odd situation that can leave you scratching your head a little.

Another interesting thing to watch is this continued game of chicken between reopening and work-at-home companies. Many work-at-home companies got consigned to the woodshed on Tuesday, and some of the leading names were ones we haven’t heard from much recently including Apple (NASDAQ:), Netflix (NASDAQ:), and Facebook (NASDAQ:). One day isn’t a trend, so it’s not clear if the “FAANGs” are out of the woods yet after being relatively flat the last two months. Still, it could speak to some investors deciding to take a late-year profit on a handful of the stay-at-home companies they’ve ridden all year like Peloton (NASDAQ:), Zoom (NASDAQ:), and Docusign (NASDAQ:), all of which got punished yesterday.

Some trends that might give more mainstream Tech names a lift include the 5G cycle, Apple’s new iPhone, and improved Chinese economic performance. Some of these factors are also giving semiconductor stocks a lift. Meanwhile, the Zooms of the world face renewed questioning about how they can continue to grow revenue at the amazing clip of 2020 as the world returns (hopefully) to normal.

Missed it by That Much, VIX Flirts With 20 Level

As sentiment around stocks continues to look positive, we’re seeing volatility test levels last seen in February. The came oh so close to digging under that psychological 20 level Tuesday, but just couldn’t find enough enthusiasm to batter it down. It bottomed exactly at 20 before popping back up a bit, and it’s back above 21 this morning.

While VIX may seem a bit removed from the world of long-term investors, when it stays low for a long time like in 2017 and 2018, it can often bring the kind of stability that makes more people feel comfortable getting into the market. That sometimes leads to better outcomes for people who are in it for the long term.

In the shorter term, Thursday morning brings key data in the form of weekly initial unemployment claims. Last week’s number surprised in an unpleasant way for the second week in a row, rising to 778,000. Analysts don’t expect much improvement in tomorrow’s number, with the average forecast at 775,000. Probably if the number is anywhere within 25,000 of that on either side it won’t have much impact on trading. Any move far higher or lower would turn more heads.

When we look back in a few months, is it possible Tuesday will be the day people talk about as a turning point? That’s one question after the 10-year Treasury yield took a quick elevator ride up about nine basis points from its recent lows to above 0.92% even as the Index and closed at new record highs. All that happened on a day when talk centered on a possible stimulus package, dovish comments from Fed Chairman Jerome Powell, and another strong round of manufacturing data that have many investors feeling optimistic.

and Treasury Secretary speak to Congress again today, but it’s hard to imagine them saying anything too market-moving. Then there’s release of the Fed’s latest Beige Book later in the afternoon, possibly providing insight into the economy. Otherwise, data is thin.

You never want to celebrate at the 10-yard line, and from a COVID-19 perspective it still feels like the ball is somewhere around midfield. Having said that, there are signs of flattening caseloads in some hard-hit states, including Illinois, which might help account for the “turnaround Tuesday” we just saw. At this point, any sign of a flattening out for the holidays—if that’s what’s happening—would feel like a victory, especially for overworked first responders, doctors, and nurses.

Clearly, the market is looking beyond the vaccine to all the great things that could happen. What makes some participants nervous is that it’s likely going to be a logistical circus getting the vaccine to everyone who needs it, so don’t get too caught up in euphoria. Logistics are where the true test will come.

Another thing that’s a long-term concern is valuations. They’re near all-time highs, and recent earnings results might have been a sneak preview of pitfalls to come. Think, for instance, about ZM’s earnings beating expectations but the stock falling. The same thing happened to Target (NYSE:) and Home Depot (NYSE:) last month. The numbers were monstrous but the stocks sold off.

As 2021 moves along, we may see a similar thing with the entire S&P 500. When people go back to work and the world returns to normal, things may be going well in the economy, but will the reality be able to meet expectations? At some point, the numbers may be great, but people may say they already expected that and companies could have to do even better for investors to buy more shares. There’s possibly a point of diminishing returns. 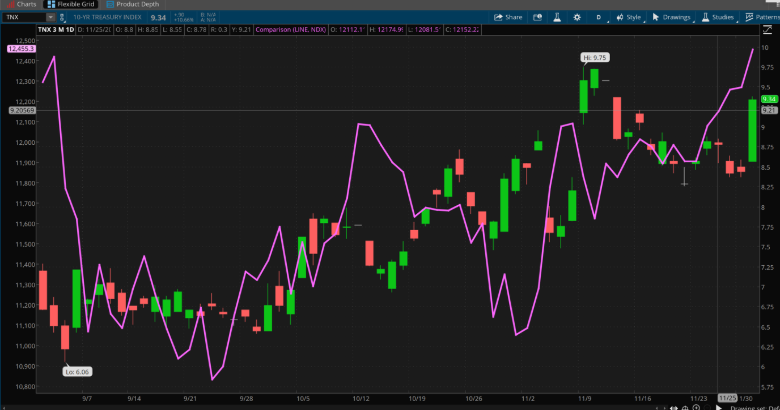 Chart Of The Day: In Sync

We talk a lot here about relationships, especially when they don’t seem to make sense. Yesterday, things seemed more in line with what you might expect as the 10-year Treasury yield (TNX—candlestick) had its best day in weeks and the overall stock market, including the (NDX—purple line) posted solid gains, too.

What to Watch in Payrolls Report

We’re less than 48 hours from finding out how the job market did in November. Friday morning’s report is expected to show around 650,000 new jobs, up from 638,000 in October, according to research firm Briefing.com. Unemployment is seen steady at 6.9%.

Back in October, there were big gains in areas like leisure and hospitality, professional and business services, retail trade, and construction. These segments were among the hardest hit by the lockdowns earlier this year. In November, as the latest wave of the pandemic sank its teeth into the economy, did those gains ease? That’s something to keep an eye on Friday. Construction jobs growth in October was quite a nice surprise. To see those jobs coming back is really, really good. It would be even better if that category kept performing in November.

Purely from a market sentiment perspective, it’s great to see Salesforce’s (NYSE:) $27.7 billion acquisition of Slack (NYSE:) announced late yesterday. That’s despite the fact that CRM shares are getting pressured after the news. Remember that for a couple of months this fall a lot of the merger and acquisition (M&A) activity took place on the semiconductor side of Tech, and now it’s moving into the rest of the sector. Companies have invested all they can in their internal processes and now they appear to be looking at how they can add value from outside to make their offerings more well rounded. The M&A earlier this year was well received by investors when it happened in the chip sector, and the CRM move may be the vanguard of seeing it elsewhere in Tech.

Something to Think About

Earlier this year, the Federal Reserve pushed the Fed funds rate back to the 0-0.25% range. Fed Chair Powell said in later testimony that the central bank would stand pat for the foreseeable future, and the board isn’t even thinking about thinking about rate hikes. Since then, CME Group’s (CME) FedWatch tool—which uses the Fed funds futures markets to calculate rate targets out to nine months or so—was flashing a 100% likelihood of staying at the 0-0.25% target as far as the eye could see.

But there was a blip on the radar screen this week—not a giant asteroid, just a blip. As of this morning, the probability measure for September 2021 moved from 100% down to a still-solid 93.8%. Perhaps it makes sense. The yield on the 10-year Treasury jumped 10 basis points since the start of the week. Prospects of fresh stimulus, along with vaccine progress that’s got people thinking about a return to normalcy next year, could unleash a wave of pent-up demand that drives up prices. We’re not there yet—far from it. But there was at least a blip.