Trade disruption will deliver a sizable hit to UK manufacturing output this quarter while lingering uncertainty and potential instability surrounding the UK-EU trade deal will keep a lid on investment. We expect consumers to lead a sharp GDP rebound this year, but higher costs and disruption will likely prevent a full recovery before late-2022.

Despite the deal, there’s been plenty of disruption

The dust has begun to settle on the new UK-EU trade deal, where initial pre-Christmas relief has quickly given way to widespread reports of disruption. The deal achieved tariff-free trade, but the UK’s exit from the single market and customs union has heralded large – and abrupt – changes to the way the UK trades with Europe.

So what’s been happening? Well firstly, it’s pretty clear that trade between the EU and UK has slowed noticeably since the start of the year. New ONS data shows fewer visits by ships to UK ports, while there have also been fewer lorries crossing the Channel.

Visits by cargo ships to the UK are lower than usual

Source: ONS
Measured as total visits to port across UK

Rules of origin and VAT changes are creating a headache

Partly this is because firms stockpiled during 2020, opting to ‘wait-and-see’ what happens in the first few weeks of January (and therefore traffic will inevitably build again over coming days). But increasingly it is also because many firms are struggling to adapt to the new trade barriers, which are many and varied, but ‘rules of origin’ is arguably one of the biggest. These barriers dictate whether a good qualifies for tariff-free entry and can be a bit of a minefield, particularly for those businesses who’ve only ever traded with the EU.

Generally speaking, a good needs to have had significant work done to it in either the UK or EU to move across the border free of tariffs. That means that, for businesses that use the UK essentially as a distribution hub for servicing other parts of Europe, a tariff may still be payable. And even where a good does meet origin requirements, anecdotally firms say it is often costly and complicated to document.

That’s just one example – VAT is another commonly cited headache, and there will be many more.

But the situation has been amplified by transport issues – and the lack of lorry queues shouldn’t be mistaken for a lack of disruption.

Some hauliers have been reluctant to carry multiple firms’ loads together in one shipment – particularly for food – given the added challenges it poses for collating paperwork and clearing customs. A handful of major logistics firms have also paused deliveries to/from the UK given a high number of consignments reportedly not meeting new requirements.

The Covid-19 disruption in December, when France closed the sea border with the UK when the new Covid-19 strain emerged, also hasn’t helped. Roughly 85% of lorries on the Dover-Calais crossing are EU based, and there is perhaps some reluctance to take UK-bound jobs given concerns about getting stranded again.

The pandemic has also limited the ability of firms – particularly small-medium enterprises to prepare. While it’s true the outlines of the trade deal have been known for months, in many cases staff involved in the preparations will have been furloughed. Smaller businesses also often won’t have had access to legal and consultancy resources to help them work through the consequences for their business.

How prepared were firms for these new changes? 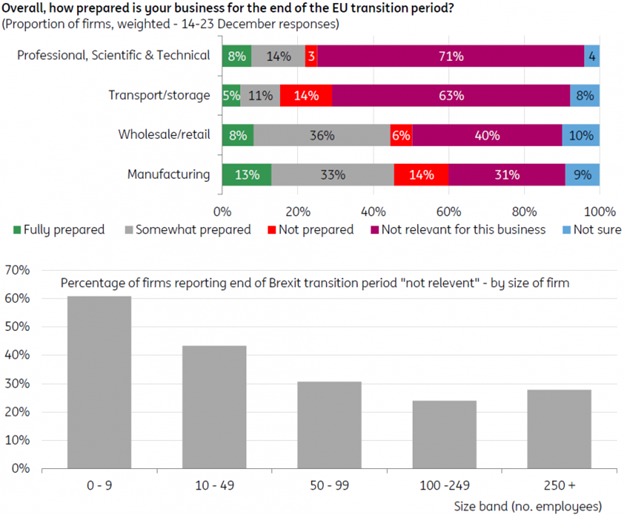 The ONS Business Impact survey from mid-December indicated that half of manufacturers were only somewhat prepared, or not at all. And across the economy, a high proportion of firms reported the changes weren’t relevant to their business – which in some cases may have been because they weren’t fully aware of the forthcoming changes. The chart above showed this tended to be more common among smaller businesses.

That said, it’s a mistake to assume this is only hitting smaller firms. While in general larger firms are likely to have been better prepared, many rely on SMEs as part of their supply chain. That was demonstrated in December when some of the major carmakers had to pause production amid a lack of supplies coming across the Channel.

In short, the situation is fairly bleak, but working out the magnitude of the impact on the wider economy is less straight forward.

One thing that looks inevitable is a fall in manufacturing production in January – perhaps in the region of 3-4%. That’s partly because the situation is unlikely to resolve itself quickly – and in fact may become worse in the short-term as border traffic builds up once again. Net trade is also likely to weigh on GDP through this year, assuming imports recover as lockdowns are unwound but exports take much longer to recover.

Of course it goes without saying that the Covid-19 crisis will dominate the GDP figures for the next few months. But assuming the economy starts to get back on its feet through the middle of 2021, the more interesting question is how Brexit will affect the recovery – and here are three factors to bear in mind.

Firstly, the new costs of customs declarations and transportation are here to stay – and this, combined with the higher administrative burden for European buyers, will inevitably reduce the competitiveness of UK exports. Unsurprisingly that’s also likely to mean some British, Europe-facing firms will ultimately no longer be profitable, and some will be forced to move more parts of their operation overseas.

While impossible to quantify, this will put additional pressure on unemployment – which is likely to rise close to 7% through 2020 assuming wage subsidies are gradually removed.

2. The impact on services is arguably more complicated than goods

Secondly, given Covid-19 travel curbs, the impact on services is only likely to become fully visible after the pandemic.

This is where the UK’s competitive advantage lies, and it is also where arguably life outside the single market is more complex. For goods trade, shipments need to meet a series of hurdles to cross the border, but after that they are more-or-less free to be sold anywhere in the EU. For services, the barriers generally take the form of regulation, and this can vary significantly between member states.

Qualifications are not automatically recognised under the trade deal – and this is unlikely to change soon. Some member states also go further with nationality/residency rules for certain professions – for example accounting/legal. Once people start to travel again, visa rules will also add extra complication. While the demand for business travel may fall post-pandemic, some services can only be supplied in-person (think engineering, for example).

The coming months will also reveal whether the UK secures a data adequacy agreement to keep information flowing, as well as on financial services equivalence.

3. Long-term relationship will be mired by uncertainty and possible instability

Finally, the big question is what happens to the UK-EU relationship in the long term. Will the UK seek closer economic ties with time – for instance, rejoining a customs union? For now this is difficult to see. The deal includes a review clause in 2024, and that almost certainly means the issue of EU trade will play a role in the election that year.

Instead, perhaps the real question we should be asking is whether the UK-EU deal will stand the test of time. In part, this depends on how the UK decides to shape policy surrounding ‘level playing field’, the issue that monopolised much of the negotiating time last year. Under the terms of the deal, the UK has committed not to lower worker or environment standards, and accepted state aid controls.

But with time that could change, and divergence could see market access partially rescinded, for example via tariffs. The deal also sets the scene for ongoing negotiations in various areas, which with time could throw up challenges that again ultimately may end in tit-for-tat retaliation (fishing is the obvious example once annual negotiations begin after an initial transition).

Trade disruption will be a drag on the recovery process

For the economy, this means a degree of uncertainty and potential instability will be a feature of the UK’s European trading relationship.
Even before Covid-19 struck, investment had underperformed G7 peers, and this is likely to continue in the post-Covid-19 recovery phase. Businesses will be wary about possible future changes to the relationship that may require further tweaks to their operating model.
While we expect consumers to lead a rebound in GDP through the remainder of 2021 (assuming the vaccine programme goes as hoped), investment is likely to lag behind – and correspondingly drag on hiring. This will likely prevent the UK economy returning to its pre-virus size until late 2022 at the earliest.

UK investment underperformed peers after referendum and before Covid-19