The figures were bang in line with expectations and may have disappointed a market that is fixated with rising inflation fears. Let’s face it, 1.7% is hardly going to inflame concerns about runaway inflation (and the core rate was lower still). That said, the latest batch of numbers are still very much “business as usual” figures, with the big pandemic-induced base effects not kicking in until the March numbers are released next month.

That said, the 0.4%MoM increase was fairly chunky and builds upon a 0.3%MoM gain the previous month. We can gain some further insight into what is happening by looking at shorter, more recent periods of monthly inflation, unaffected by pandemic base effects, and annualizing them. This is what we do in the chart below, and it shows that 3m and 6m annualized inflation is running well above 2%, closer to 2.5%, and rising. This supports what JK is saying about the looming peak in inflation, and also hints at the sort of levels to which inflation might drift down to later in 2021 after the base-induced peaks, but only on the assumption that these annualized rates do not pick up further, which is by no means assured, and JK has noted some pick up in margins expansion, especially in the service sector in some of his recent notes. So such annualized figures might best be viewed as the lower bound of what is likely towards the year-end. 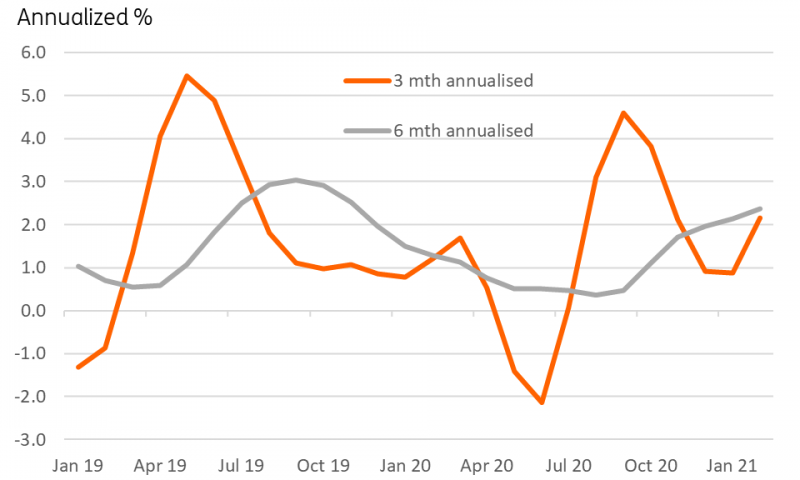 Our head of Global Macro, Carsten Brzeski, plus Petr Krpata, our Chief EMEA FX and rates strategist have written a crib sheet for you for today’s . Their main view is that the ECB doesn’t need to fight the EUR appreciation anymore by taking an overly dovish stance, given that it isn’t appreciating at the moment. Do give it a read for more of the detail, I can only make brief remarks here.

The two also consider various possible tweaks to the Pandemic Emergency Purchase Programme (PEPP) but conclude that unless the programme is extended, it shouldn’t have much impact on .

The final part of the note reasserts the broad EUR positive sentiment our FX strategists prefer, referring to the worst of the Treasury sell-off being over by 2Q allowing for the EUR to resume its ascent. If you wanted to try to pick holes in this argument, it might be in terms of the timing. Given what we talked about earlier in terms of the US inflation story, and James Knightley’s May/June peak, 2Q is exactly when we will be seeing the peak US inflation figures along with the impact on growth (and possibly also a further pick up in monthly inflation rates) of the Biden stimulus cheques. That might not lend itself to a calmer US Treasury market quite so early.

Here in Asia, the outlook for Singapore strengthens

It’s not all G-7 stuff though, here in Singapore, the Monetary Authority of Singapore (MAS) has just released its quarterly survey of professional forecasters, in which we also participate. Prakash Sakpal summarises the report: “The broad findings of the MAS survey reflect the economy on a stronger recovery path this year than envisaged earlier. The median forecast for GDP growth in 2021 is nudged up to 5.8% from 5.5% in the December survey, led by firmer exports and manufacturing. The CPI inflation view is also revised to 0.9% from 0.6%, though with lagging core inflation at 0.7% suggesting a slow consumption recovery.

What probably stands out in this survey is the growing optimism on the property sector, with more respondents (75% vs. 63% in December) expecting property prices to rise this year and the rest forecasting them to be stable. This follows the resiliency of the market to the pandemic and rising property prices over the last year, which have started to stoke fears that the authorities will step in with more cooling measures (read more here). We believe a firmer property sector will continue to be a key sentiment booster towards the economy’s bounce back from a record slump last year. However, the recovery is still not fully guaranteed given that multiple waves and variants of the virus continue to pose a downside risk to global demand. Therefore, any intensification of cooling measures could be premature and destabilizing for the overall economic recovery, especially given a still-solid consensus that the MAS will maintain its neutral monetary policy throughout the year.”

China loan growth weakens – but nothing to worry about

And Iris Pang in HK has these comments to make on the latest Chinese loan figures: “China’s yuan loan growth of CNY1.360 trillion in February, though small compared to CNY3.58 trillion in January, beat expectations. The slower growth was mainly a result of the short month due to the Chinese New Year. But it reminds us that deleveraging in the property sector has not hurt loan growth that much as policies have limited loans drawn by real estate property developers. The recent deleveraging in real estate developers might have more effect on debt issuance rather than on loan growth. The higher-than-expected loan growth also highlights that China’s infrastructure projects are in the pipeline”.