Is that a red flashing light on the control panel of “the man behind the curtain”?

1. Just like in 2000, proponents claim “this time it’s different.” Back then, the claim was that since the Internet would be growing for decades, dot-com stocks could go to the moon and beyond.

The claim the the Internet would continue growing was sound, but the prediction that this growth would drive stock valuations into a never-ending bubble was unsound.

Once again we hear reasonable-sounding claims being used to support predictions of a never-ending rise in stock valuations. Some observers find this “interesting.”

This ratio increased with every one of the three bubbles since the mid-1990s: the dot-com bubble in 1999-2000, the Global Financial Meltdown in 2008-09 and now the bubble of 2020-21. That financial assets are now six times the size of the “real economy” (GDP) is an “interesting” data point

5. Despite assurances that “this time it’s different,” all speculative bubbles pop because they are based in human emotions. We attempt to rationalize the bubble by invoking the real world, but bubbles are manifestations of human emotions and the feedback of being in a herd of social animals. I’m not sure if this even qualifies as “interesting” or not; perhaps it’s too “obvious” to be “interesting.”

Is that a red flashing light on the control panel of the man behind the curtain? Probably nothing, pay no attention…. 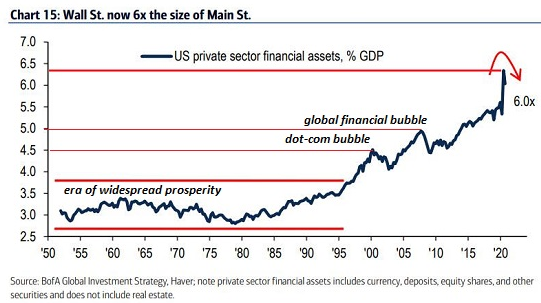