I know everyone is tired of hearing about the virus. Some think it is overblown by the media, many want to focus on the positives, and others have had their lives upended and want to forget.

There are reasons for optimism. It is a new year with longer days and warmer temperatures. People continue to get inoculated with increasing speed. The approval of new vaccines continues as new cases, deaths, and hospitalizations from the third wave fall (see below).

The 1918 Spanish Flu had three waves over about a year; the COVID-19 pandemic has had three over a year as well.

Indeed, this is about over, right? 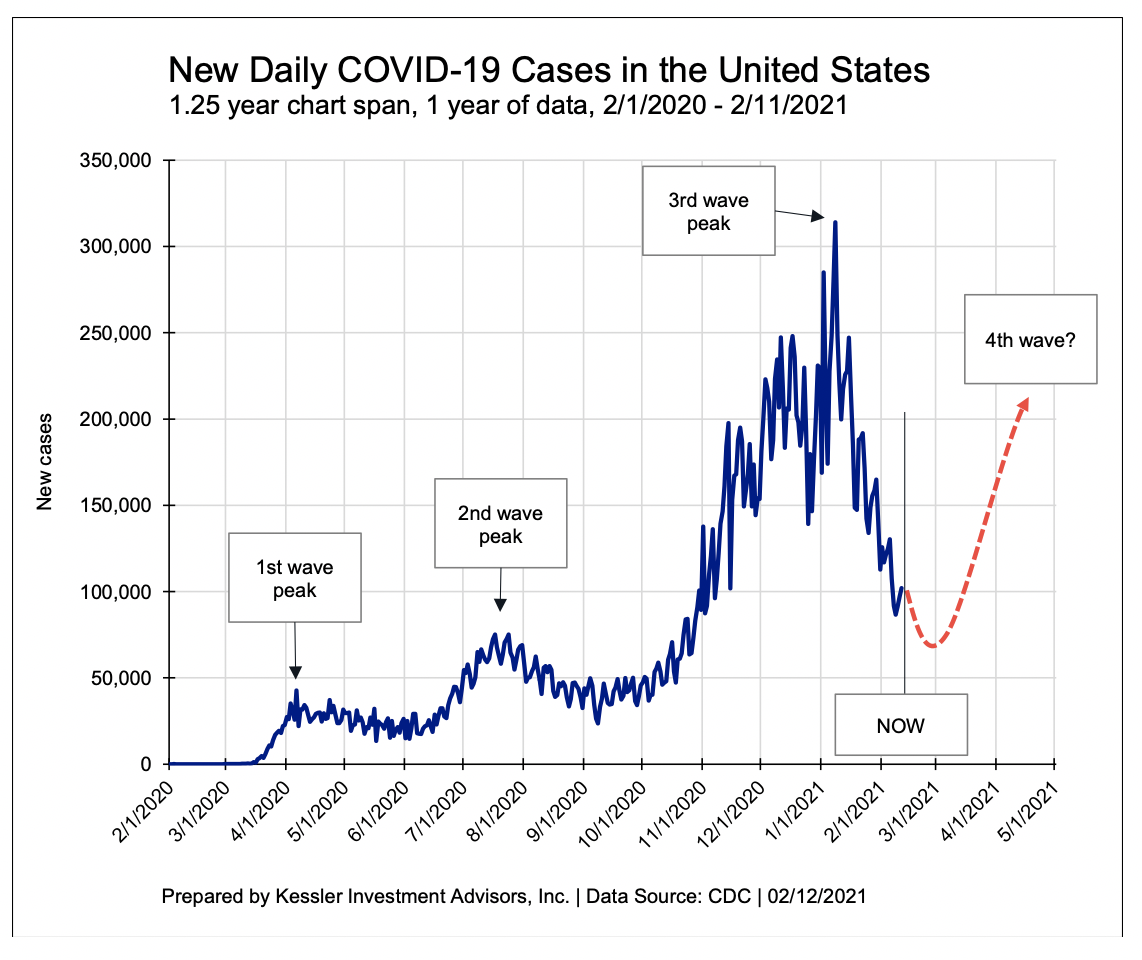 Daily New Covid-19 Cases In US

It isn’t over, and financial markets don’t accept that yet. I realize suggesting anything negative about the virus is misanthropic, but the truth matters, and the optics are misleading.

New cases decrease in the third wave because we are past the holidays, not because of vaccinations. It is a common misconception the decrease we’ve seen in the virus is due to vaccinations. The two aren’t related, at least yet.

“We’ve seen these rises and falls in the COVID case counts now a few times, and they seem to really track along holidays or people’s movements,” Shah said.

Dr. Wafaa El-Sadr, professor of epidemiology and medicine at Columbia University’s Mailman School of Public Health, said the falling case numbers couldn’t get attributed to the COVID-19 vaccine. Not even a tenth of the population has gotten vaccinated, according to the CDC.

“We’re vaccinating our most vulnerable populations right now, but once we start to move into the broad population, the population that’s driving the numbers. That’s when we’ll start to see an impact on the overall numbers,” Shah said.

She said Americans might start to see the vaccine’s influence on case numbers as early as the summer, but it will be more evident in the fall.

As with all replicating biological entities, viruses change over time with random mutations to their genetic code (genome) when reproducing. Most mutations do not affect or are detrimental. Still, every once in a while, a random change (or series of changes) will alter a trait that increases its biological fitness—its competitive advantage in its environment. Beneficial mutations get carried forward to new generations, which crowd out the inferior older genome. Such is natural selection.

The process happens at a glacial pace in the life-forms we are most familiar with (say mammals) because reproduction takes years. Viruses replicate in a matter of hours to days, and more specifically, single-strand RNA viruses (of which the coronavirus, SARS-CoV-2, is one) replicate faster than other viruses.

Viruses that encode their genome in RNA, such as SARS-CoV-2, HIV and influenza, tend to pick up mutations quickly as they get copied inside their hosts, because enzymes that copy RNA are prone to making errors.

The concerning new Sars-CoV-2 variants emerging from the U.K., South Africa, and Brazil have yet to become dominant in the U.S. On Feb. 7, a study reported that the more transmissible U.K. variant is now “spreading rapidly in the U.S.” It could become the dominant strain by late March. Italy’s health ministry said on Feb. 12 that the U.K. variant makes up 17.8% of cases and will likely become prevalent in the coming months. The vaccine-weakening South African and Brazilian variants got detected in the U.S. in January. There are now several cases dotted around the U.S. They will presumably gain traction as they did in their original countries. This process takes months.

The variants detected recently in the U.K. and South Africa have several novel changes in their spike-protein genes.

Scientists think one mutation these variants share could help the virus attach to and enter cells. The recently detected variant from Brazil shares a key spike-protein mutation with the one from South Africa.

“What we’re seeing is exactly what we expect to see. The surface proteins of the virus are under tremendous pressure to change.” – Sean Whelan, a virologist at Washington University in St. Louis.

“All the virus really cares about is multiplying. If it can get into the cells of the [host] and avoid the immune system of that host, it will multiply. Whether it causes the disease is a different question.”

Some scientists worry that South Africa’s variant could be better at evading antibodies produced in response to natural infection and vaccination. Preliminary estimates suggest the variant from the U.K. is 50%–70% more transmissible than earlier versions of the virus. And U.K. scientists said recently that early data suggested it could also be deadlier.

The variants found in the U.K. and South Africa have become the dominant types in countries where they were first detected. 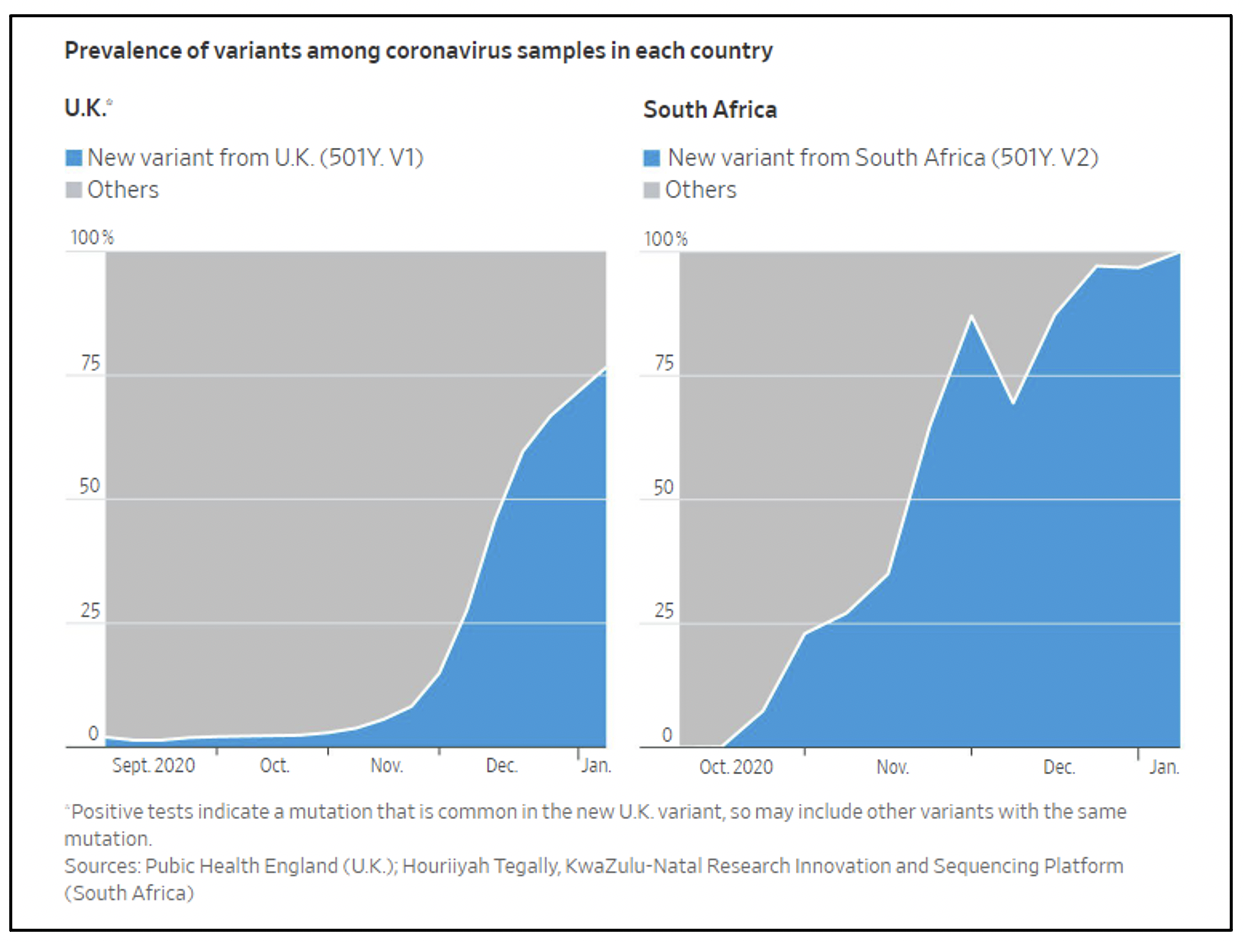 Prevalence Of Variants Found In Coronavirus

The variant from the U.K. has spread widely abroad. As of late January, it had been reported in 70 countries and territories. The variant from South Africa has been reported in more than 30, while the U.K. variant was detected in more than two dozen U.S. states through late January. The Centers for Disease Control and Prevention projected it could become the dominant domestic strain by mid- to late March unless steps are taken to slow it. Variants first found in South Africa and Brazil have also been detected in the U.S.

Restricting travel between continents may prevent these variants from getting around, but there is another wrinkle to this. In biology, convergent or parallel evolution is a common yet counter-intuitive phenomenon. Independent lineages of a biological entity can arrive at similar evolutionary fitness solutions without any interaction between them. The similarity between the sugar glider (marsupial from Australia) and the flying squirrel (mammal from North America) is an example of this (image below). 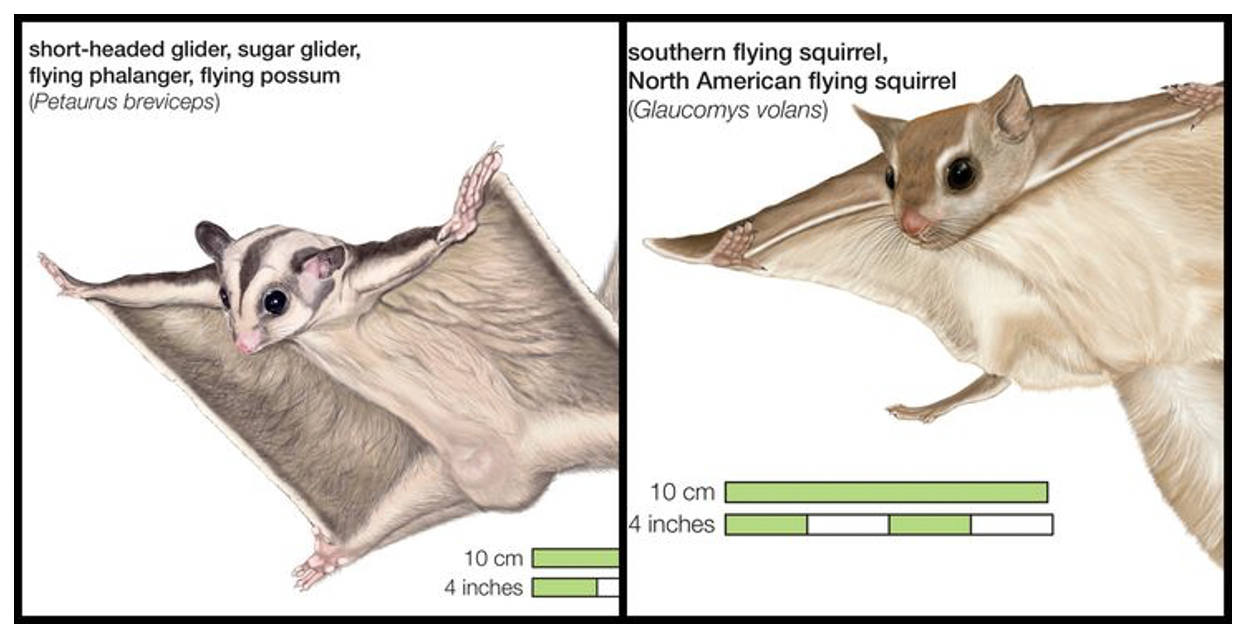 The same phenomenon is happening with Sars-CoV-2 mutations. Critical mutations from the U.K. variant (N501Y) and the one shared by the South African and Brazilian variants (E484K) emerged independently in a now-deceased Boston COVID-19 patient with a prolonged continuous infection. There are quotes from a National Public Radio story below. But for those interested, it is an interesting read (or listen) found at the link below:

Li and his colleagues published their findings in The New England Journal of Medicine in early November 2020 with little fanfare. Then about a month later, the pandemic took a surprising turn – and this peculiar case in Boston took on a new importance.

Scientists in the U.K. and South Africa announced they had detected new variants of the coronavirus. These variants were causing huge surges of COVID-19 in these countries.

When researchers looked at the genes of these variants, guess what they found? A cluster of mutations that looked remarkably similar to the mutations found in the virus from the Boston patient. The sets of mutations weren’t exactly identical, but they shared important characteristics. They both had about 20 mutations, and they shared several key ones, including a mutation (N501Y) known to help the virus bind more tightly to human cells and another mutation (E484K) known to help the virus evade antibody detection.

The virus may optimize itself to known mutations without spreading geographically, weakening the power of travel restrictions.

The virus is just a little over one-year-old on its new metaphorical planet of “humans” and is still trying to find an evolutionary best fit. A safe assumption is that more variants will emerge.

“Look, there is going to be a whole cascade of these new variants. The virus moved between species. It migrated from the back end of a pangolin and to humans. And it’s got to adapt to humans. What we see now is it is getting better and better and more efficient at living in humans. And that we can see a set of other mutations coming down the line. So, I think we mustn’t say ‘ahh, well we now know what the mutations are going to look like.’ We don’t. There’s gonna be a set of other ones.”

Even though vaccination plans for developed-world adults are firming up, the developing world and children are less clear. As long as the virus circulates in humans anywhere, it will find new optimizations that will likely require vaccine alterations.

The more widespread infections remain globally, the more mutations will occur. A lingering pool of cases in poorer countries risks giving birth to resistant strains that force richer economies to lock down and start vaccinating all over again.

Financial Times, 02/05/2021, “The global race between vaccines and mutations”

Taken together, it is probable that the world will have at least one more severe wave of infections this spring and summer – a fourth wave – before the inoculated and previously infected can crowd out those with no protection. Re-vaccination (booster shots) for new variants add to this timeline.

Such isn’t doomsday, but at a minimum, it elongates the time until battered industries (hospitality, entertainment) will have a chance to recover. So far, markets continue to believe the pandemic is a net benefit to bigger businesses globally (all-time highs in public companies, see below). 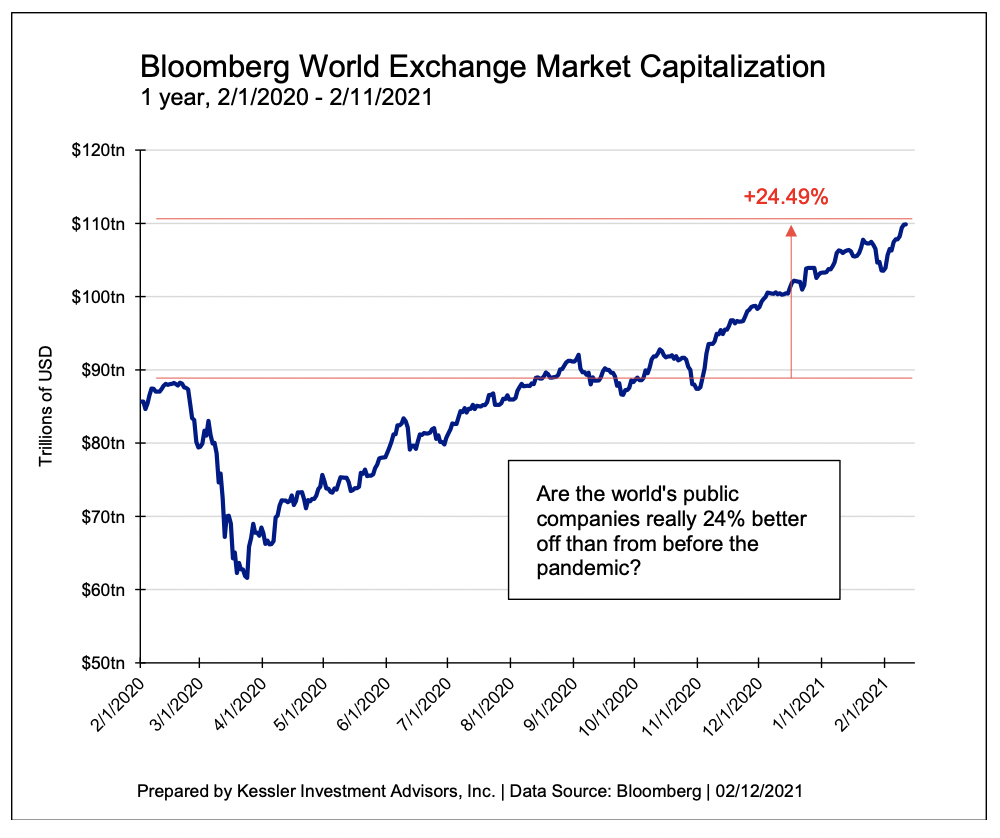 The explanation for this is that it is only the small, non-public companies that are struggling.

The pandemic will cost the world’s public companies in aggregate at some point. I wrote nine months ago that “COVID-19 Defies Hyperbole.” Even though risk-on markets had gone up when I suggested they would go down, I stand by my prediction. Apt fiscal and monetary injections forestalled a deeper contraction. Still, it is a delusion to think we will get out of this for free—especially in a world economy that was overdue for a retraction anyways.

Even without a fourth COVID-19 wave, the negative impact on jobs, rents, consumer demand, tax revenue, and entire economy segments (hospitality, entertainment) has yet to be considered seriously. As they become so, risk-on markets (stocks, commodities, crypto-currencies, houses, and non-G-7 currencies) will drop, and long-term U.S. Treasury yields will fall dramatically.