On Wednesday morning, the Asian market indices are moving upwards following the new records of the American indices. Buyer optimism is fueled by continued efforts by legislators to introduce more fiscal stimulus and is supported by positive news on the COVID-19 vaccine. Another factor is the self-sustaining hopes for the end of year rally.

The expectation is that government support will allow people more money for spending and investment, thus increasing inflation which weakens the value of money. 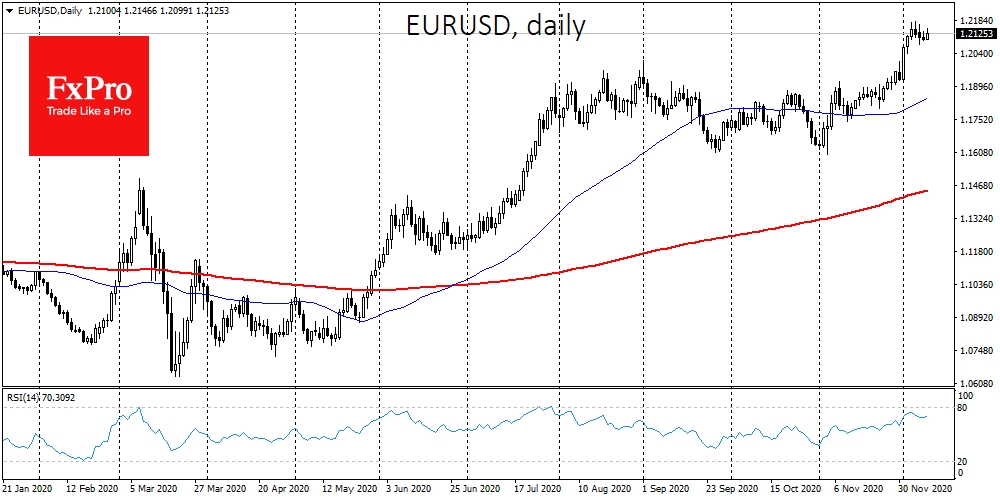 ECB has many reasons to try to stop the Euro, but will it?

The weakening of the against most competitors is more akin to the market reflex developed in previous months rather than a fundamentally sound strategy. This is especially true for the against the dollar.

Earlier this year, news about the EU’s agreed support package supported the Euro’s growth. However, the same data from the US caused pressure on the dollar. Now we witnessing again how the discussion of support in the US is causing a weakening of the dollar, which could be an additional factor in supporting the recovery.

Is the eurozone ready to see export competitiveness squeezed out by the rising Euro against the dollar? Perhaps tomorrow it will be clear what the ECB thinks about this.

Rising exchange rates and inflation at -0.3% YoY allow the central bank to increase monetary stimulus proactively in an attempt to return prices to a growth trajectory “just under 2%”.

Potentially, the ECB has many reasons to try to stop the Euro from growing by easing its policy tomorrow. But the fact is that it is not that easy to do so. Recent history suggests the European Central Bank is often very sluggish to act proactively. Besides, bets are already in negative territory and are criticized for their inefficiency.

Short-term investors should therefore be wary and plan for a sharp and prolonged decline in the Euro after tomorrow’s ECB monetary policy meeting.