A reader from Brussels asks why the is so strong.

Why is the Euro currency so strong? It is not that everything is hunky-dory here because it definitely isn’t. But this counterfeit currency was created with the one and only purpose: to benefit export-driven Germany.

The euro is flawed. It’s a currency too weak for Germany and too strong for the other countries allowing them to ‘happily’ buy German products.

The euro is indeed fatally flawed. But what about the ?

I am asked far more frequently “What’s holding the US dollar up?“

The “dollar is so extremely oversold, over-hated, and over-shorted that it all but has to rally for a while at some point soon.” 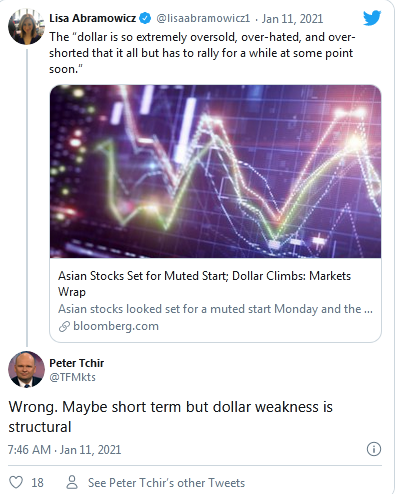 Right now those cows are somewhere over the moon.

The US dollar index surged above 100 in belief the Fed was on a tightening cycle.

Then it wasn’t and now short-term treasury yields are back close to zero.

But at least they are above zero.

And note there are no Euro bonds to speak of. It’s every county for itself. that’s part of the fatal flaws of the Euro.

Chart from the ECB Statistical Warehouse.

It represents goods purchased by debtors in Spain, Italy, Portugal, and Greece owed to creditors in Germany, Luxembourg, etc.

It is also a measure of capital flight.

Some, me included, believe the -330.7 ECB number hides loans to Italy and Spain.

Regardless of what the ECB is doing, it’s an imbalance of some sort.

Do you really believe these debts will be paid back? I don’t.

And if Italy left the Eurozone as it once threatened, the whole mess cascades. Spain and even Greece would be responsible to make good on the default.

Target2 is one of the biggest fundamental flaws in the Eurozone. The euro founders were well aware of it. But it was the only way to get Germany to go along.

The Maastricht Treaty that created the euro excluded mutualized debt at Germany’s instance. There are no Eurobonds.

The debt of each county is supposed to be equally good. But the euro crisis proved the debt of EMU countries is not equally solvent. If it were, German bonds, Greek bonds, and Portuguese bonds would all trade at the same interest rate.

Don’t Be So Centric

Whenever I get asked “What’s holding the dollar up?” I tend to reply don’t be so US centric.

My response to “What’s holding the Euro up?” is don’t be so Euro centric.

The Fed is more open in its mischief.

The dollar weakness is “structural” but the euro was “fatally flawed by design” as an appeasement to Germany.

Those are the competing forces.

Whether the dollar or euro is rising or falling is determined by sentiment at the moment.

Right now, the market is focused on US structural weaknesses including trillion dollar deficits and a Biden election.

At times, the market is more worried about Target2 imbalances, fatal flaws of the Euro, negative interest rates, or a eurozone breakup.

Tell me what the more important concern will be a year from now and I will tell you which one will be sinking faster.