The strengthening of the is taking its cue from the optimism around economic recovery, which is reflected by the steepest yield curve we have seen in 5 years.

While the Fed is slashing the near-term yields to rock-bottom, Treasury yields with a maturity of more than three years are rising rapidly. In the current situation, this indicates impending higher inflation rates. 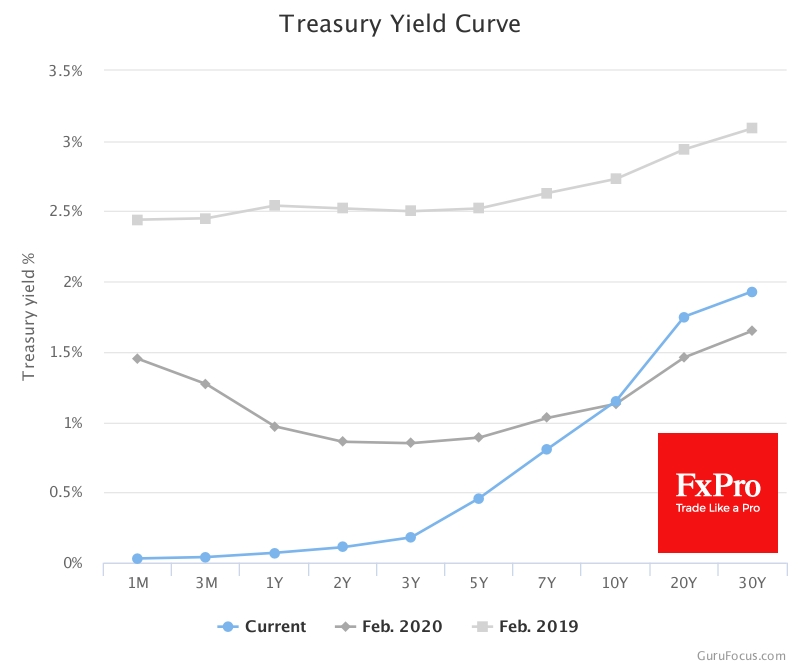 The steepest yield curve in 5 years

There are two explanations for these forecasts. The first is that the expectation of stronger economic growth would allow the US Federal Reserve to normalise rates in the longer term by winding down its emergency support programs.

The second explanation for market dynamics is not so optimistic. The rise at the longer end of the curve is explained by both higher inflation expectations and a perceived increase in government bonds’ supply, which is undermining their price. Yields on Treasuries have risen to 1.92% and are almost back to pre-crisis levels of 2%. are yielding 1.31% versus 1.56% a year earlier and have come a long way from 0.5% last July.

Higher yields are attracting buyers of long-term US government bonds, creating a pull in the dollar. However, it is also worth looking at the situation from a different angle: Higher yields mean lower prices for these bonds. In other words, the balance has already shifted towards sellers.

The nature of the stimulus measures and multi-year lows for many commodities last year make the most likely scenario the beginning of a new commodity supercycle, during which the dollar sagged in the 2000s, mid-1930s and early 1960s.

This suggests that the current dollar recovery may be a small jump before a long downfall.