While the new administration took early steps to distance themselves from a number of policies of the Trump-era, a continuation of the strict stance on foreign currency mis-practices with specific focus on China is widely expected.

The Treasury is responsible for the US foreign policy when it comes to currency practices, and Secretary Janet Yellen made clear in her confirmation speech that she intends to hold a tough line on currency manipulation and that she stands ready to “take on China’s abusive, unfair and illegal practices”. In this article we look at how the next Treasury FX Reports may look like to fit the new US trade agenda.

The FX report aims at identifying those countries that engage in FX interventions to gain a trade advantage to the US. Three criteria must be simultaneously met to be labelled a currency manipulator and the Treasury must engage in one year of bilateral talks with the country named a manipulator to encourage more fair and transparent FX practices. Eventually, penalties or tariffs can be imposed.

The three criteria (shown in the picture above) have some quantitative thresholds that must be met. Those thresholds were lowered during Trump’s presidency, making it more likely for a country to exceed them.

Since the introduction of the report in 1988 and before the change in the criteria under Trump, only three countries had been labelled as currency manipulators (Japan in 1988, Taiwan in 1988 and 1992 and China from 1992 to 1994). In August 2019, at the peak of the US-China tension, China was named a manipulator despite meeting only one of the three criteria. The tag was then removed in January 2020, ahead of the Phase-one trade deal. In the very last report under Secretary Steve Mnuchin in December 2020, Vietnam and Switzerland received the manipulator tag. Dealing with the existing “manipulators” will be the first challenge for Secretary Yellen.

Switzerland’s central bank (the SNB) was firm in affirming the US Treasury tag would not change the wide use of FX intervention as part of their policy mix after receiving the manipulation tag. Latest data on sight deposits (chart below) suggest that the SNB FX interventions have been more contained in line with easing buying pressure on the safe-haven as the global recovery gathered pace (CHF is down 4.7% YTD vs USD). 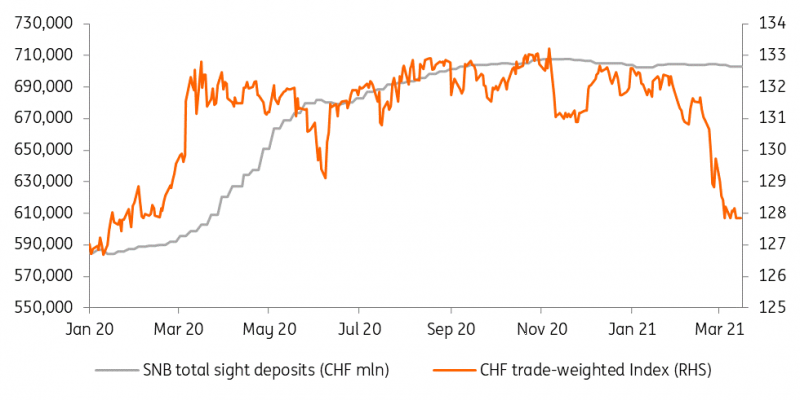 Switzerland has not been a key target in the recent US trade policy, despite the country having a sizeable goods trade surplus with the US ($56.7bn in 2020), which are mostly pharmaceutical products. If anything, a tough stance on Switzerland’s FX interventions may be a way to discourage similar practices among other developed countries.

The Treasury approach on Vietnam may, instead, provide a hint of what will be the stance on the macro Asian region. Arguably, Vietnam has been the example of widespread currency practices among export-oriented Asian countries that have an interest in keeping appreciating pressures on their domestic currencies contained.

After receiving the tag, the Vietnamese central bank took steps to reduce their FX interventions, by announcing in February that the operations in the FX market would be cut from a daily to a weekly frequency, with the aim of allowing the dong to float more freely. The current account surplus is also estimated to shrink below the 2% threshold in the coming years according to the latest IMF estimates (chart below). 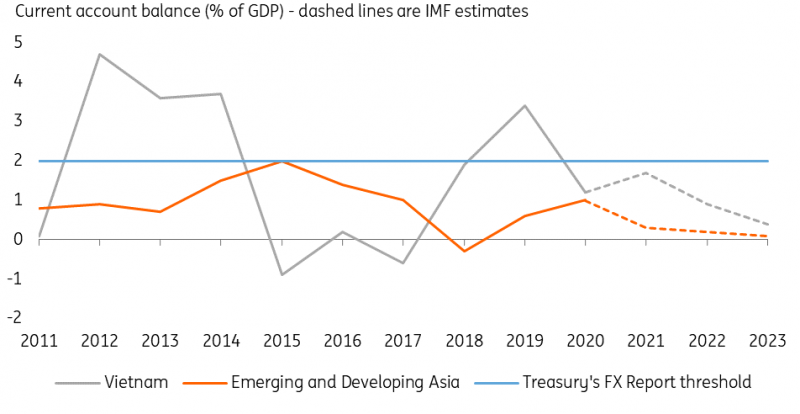 Relationships with China have moved back to centre stage this week after the US, EU, Canada and UK imposed sanctions on four Chinese nationals and one entity over alleged human right abuses. As markets may start to look beyond the pandemic period in the coming months, Sino-American relations may re-emerge as a key topic.

While China may well continue to be the main concern for the Treasury, the FX Report will most likely retain a big deal of focus on the Asian region as a whole. Eight of the ten countries included in the monitoring list (for those countries that only meet two of the three criteria) in the December 2020 report were Asian countries: China, Japan, Korea, Singapore, Malaysia, Taiwan, Thailand, India.

With the global recovery gathering pace and the relatively good contagion situation in most of Asia, there is surely room for more inflows into Asian assets later in the year and we could see Asia FX find fresh support along with a generalized dollar weakness. The stance of the Treasury on FX interventions – and its ability to send a firm message to local central banks and government on this matter – will likely be a factor to consider to estimate the size of any new Asia FX rallies.

As shown in the chart below, the average of FX reserves (as % of GDP) rose drastically in 2020. That appears not only related to the initial pandemic shock, as it actually increased in pace in late 2020 when global financial conditions materially improved and – incidentally – saw an outperformance of the Asian EM bloc in the FX space. This tends to signal rising currency interventions by those country over the past year. 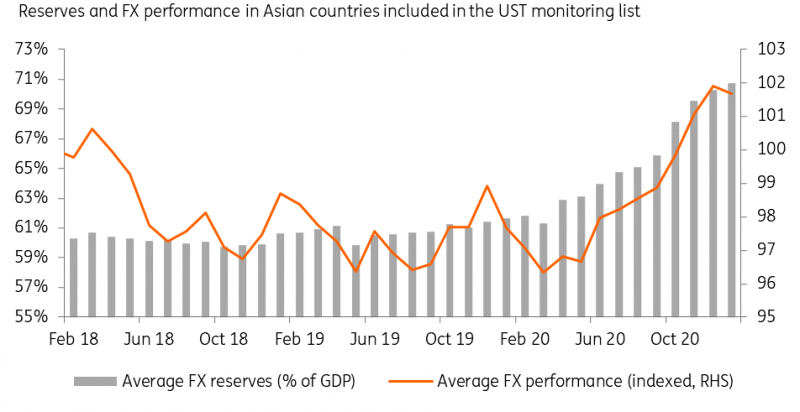 Taiwan is one country that had already attracted some of the attention of the Treasury for FX mis practices, and we estimated that the country met all three criteria to be labelled a manipulator back in the summer of 2020. The Treasury only put Taiwan in the monitoring list in December, but the country has actually ramped up its FX interventions of late. Last week, the Taiwanese central bank Governor even acknowledged that Taiwan may be labelled a currency manipulator by the UST, but minimized the risk for the economy from receiving such a tag.

Taiwan’s CB relaxed comments on the risk of being labelled a manipulator are likely emblematic of the fact that the FX Report and the manipulation tag itself have not fully served the purpose of discouraging FX interventions in targeted countries.

Indeed, the FX Report is only one instrument to achieve the goal of more market-based FX regimes, but the new administration might start to see the need for a revision of how the Report is built and what consequences the manipulation tag has.

First, the criteria-based system does restrict the ability of the Treasury to mark a country a manipulator – barring impromptu measures like the China labelling in 2019 that were not unusual under President Trump. The three criteria have the same weighting, so that a country that has explicitly intervened to stop its currency appreciation may be spared the manipulator tag thanks to having a current account balance below 2% (that was the case of China, for example) or a goods surplus with the US below the $20bn threshold. Making the FX intervention criteria more relevant for the final decision could provide more flexibility to name countries FX manipulators based on those countries’ specific circumstances.

Second – and possibly more important – the Treasury might consider implementing tougher (and quicker) measures to those countries that are labelled FX manipulators. The relaxed stance of Taiwan despite the material risk of receiving the manipulation tag was likely emblematic in this sense. The lack of immediate consequences for the domestic economy – considering the US Treasury would first have to go through one year of negotiations with the local authorities – may have a role in pushing countries to accept the manipulation tag with the prospect of postponing any changes in the currency practices to when the risk of sanctions or tariffs become more tangible.

Should Secretary Yellen decide to make the FX Report a more central tool in her announced fight against FX mis-practices, we may see some changes in the next four years on these two critical points.