It doesn’t garner as much headlines as continental rivals like the European Central Bank or Bank of England, but the Swiss National Bank has long been a bastion of conservative, prudent monetary policy for centuries. Traders are eager to see if the SNB can live up to that reputation at this week’s .

When is the SNB meeting?

SNB meeting: What to watch

The biggest news out of the typically-quiet central bank was a whopper: The SNB spent a staggering CHF 110B on intervention to stem the appreciation of the in the FX market last year. With all the uncertainty around the impact of the global COVID pandemic, traders shifted their focus from getting a return on their capital to emphasizing the return of their capital, and that led to immense buying pressure in the safe haven franc.

The Swiss National Bank now holds CHF 999B on its balance sheet, substantially larger than the Swiss economy’s annual GDP. Some analysts fear that these large holdings could limit the central bank’s flexibility or threaten its credibility moving forward, but the central bank isn’t outwardly concerned yet. According to a spokesman:

“[t]he SNB has sufficient scope for expanding its balance sheet further, should this be necessary for monetary policy reasons” and that “[f]oreign exchange market interventions and the associated expansion of the balance sheet are currently a necessary monetary policy instrument and have nothing to do with currency manipulation.”

In other words, the SNB won’t hesitate to expand its FX market interventions if needed, though with the Swiss franc seeing the worst performance among the major currencies so far this year, it’s unlikely we’ll see any moves on that front this week.

After trending consistently lower throughout the last three quarters of 2020, USD/CHF found a near-term bottom the first week of January and has been trending higher ever since. Following a sharp 400-pip surge in a three-week window starting in mid-February, the pair has spent the last two weeks consolidating above 0.9200.

The current consolidation has alleviated the overbought reading in the 14-day RSI and all of the major moving averages are trending higher, indicating that the path of least resistance for USD/CHF is to the topside (bearish for the Swiss franc). If the SNB confirms this view with a more dovish outlook on the Swiss economy, USD/CHF could rally to a fresh 8-month high above 0.9400 in the coming days. On the other hand, a more hawkish outlook and break below last week’s low near 0.9200 would open the door for a deeper retracement toward 0.9100 in USD/CHF: 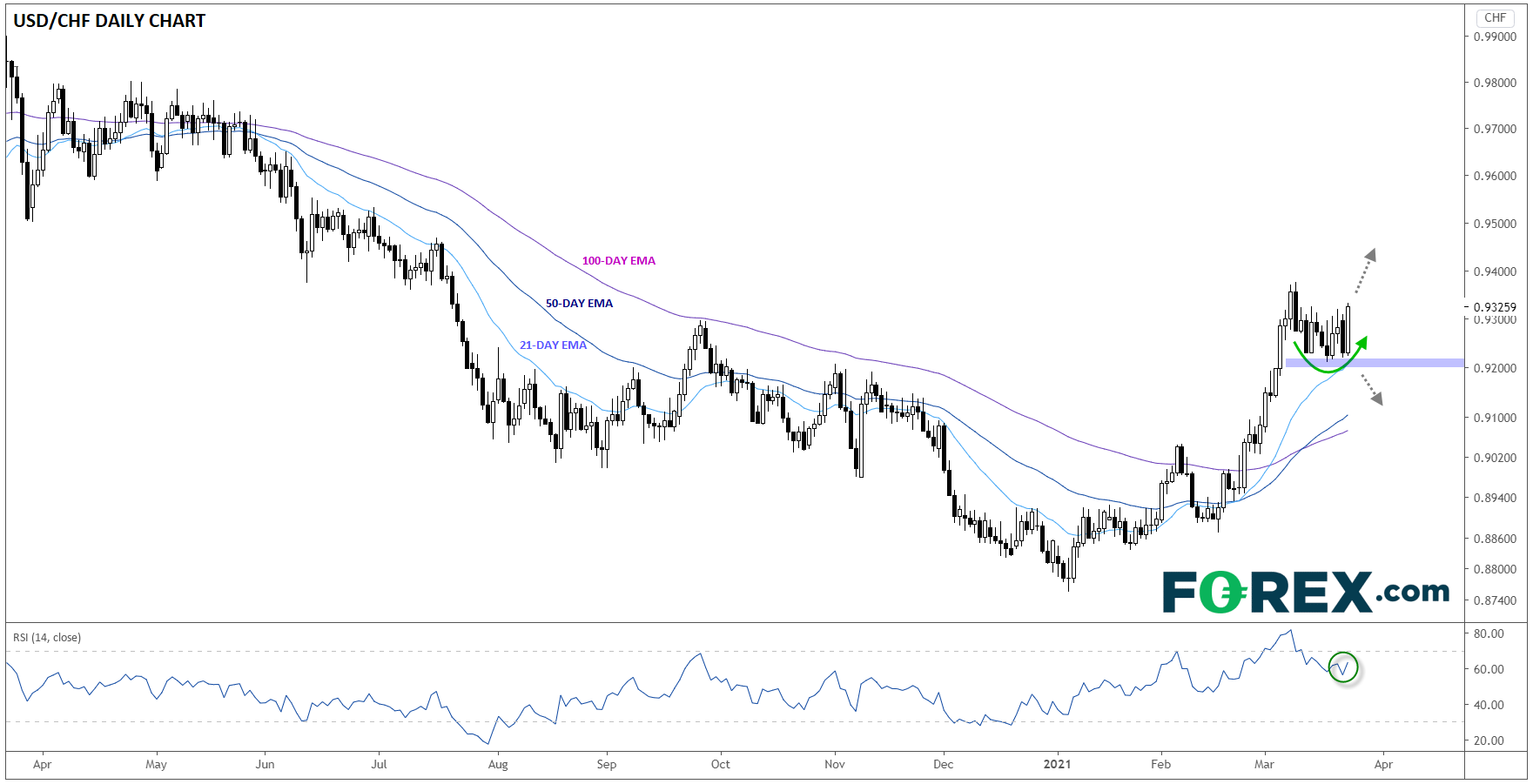