With an end to the global pandemic finally in sight, risk appetite has surged across the board, with global indices seeing one of their best months in decades while higher-yielding currencies like the and dollars have surged against safe havens like the and . However, these moves have been driven by expectations about a future economic recovery, but the current situation for the US labor market is decidedly more dour. Accordingly, economists are expecting Friday’s closely-watched report to show that the US economy created just 500k jobs in November, with average hourly earnings rising just 0.1% and unemployment ticking down 10bps to 6.8%: 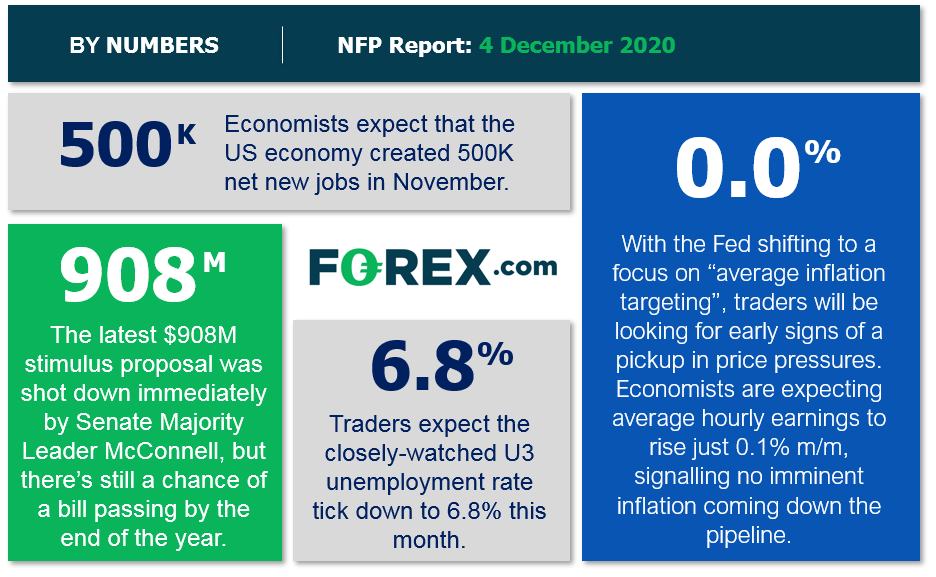 As we’ve noted repeatedly over the last few months, traders should take any forward-looking economic estimates with a massive grain of salt given the truly unparalleled global economic disruption as a result of COVID-19’s spread. That said, weighing the data and our internal models, the leading indicators point to a potentially worse-than-expected reading from the November NFP report, with headline job growth potentially rising by “just” 300-400k jobs, though with a bigger band of uncertainty than ever given the current state of affairs

See wage and job growth scenarios, along with the potential bias for the U.S. dollar below:

When it comes to the FX market, there are no two ways about it: The US dollar has been in freefall for the past three weeks as traders bail out of safe haven trades in anticipation of a global economic recovery in 2021. If we see a weaker-than-anticipated jobs report (either on a headline basis or in the average hourly earnings figures), readers may want to consider going long AUD/USD, which has broken above strong previous resistance near 0.7400 and could now play “catch up” with other major pairs. Conversely, if we see even a decent jobs report, traders may look to take profits on US dollar shorts ahead of the weekend. In that scenario, readers could consider shorting , which is testing previous resistance near 1.3500 and could be vulnerable to a deeper pullback if Brexit talks deteriorate over the weekend.