Currency traders should brace themselves for a very busy 24 hours. The list of market-moving economic reports scheduled for release is long and includes the Federal Reserve’s monetary policy announcement, U.S. retail sales, EZ and UK PMIs, along with the UK and Canada’s CPI reports. Any one of these reports could set off big moves in FX, but, collectively, there’s serious risk of volatility, divergences and trend reversals.

Over the past month, the U.S. dollar has fallen steadily to 2.5-year lows against the , , , and dollars. The ongoing pandemic and lack of additional fiscal stimulus has drawn investors out of the greenback and sparked expectations for Fed easing this month.
The Federal Reserve is widely expected to leave interest rates unchanged, but there’s talk that it could increase stimulus by extending the maturity-of-asset purchases. A quick look at the following table reveals the motivation for this outlook. Since the last policy meeting in early November, manufacturing and service sector activity slowed, leading to significantly weaker nonfarm payroll growth. Retail sales growth moderated as jobless claims spiked higher. Low interest rates continued to support housing and inflation but that may not be enough. For the central bank, the impact of the vaccine rollout will be weighed against joblessness. If the Fed eases, but expresses optimism on the recovery, short covering could drive the deeply oversold U.S. dollar sharply higher. Hours before the FOMC, the U.S. will be released and the risk for the dollar is also to the upside given the uptick in wages and strong reports of online shopping.
By the time the North American session rolls around, Eurozone and UK PMI reports will have been released. Lockdown restrictions made November a tough month for many European nations. We may finally see evidence of the damage in tomorrow’s PMIs. Euro and sterling, which are hovering near 2.5-year highs are vulnerable to a correction. fell to its weakest level since April despite cautious comments from central bank Governor Tiff Macklem. He said the economic recovery from the pandemic is at a very difficult stage and there are tools available if we need to do more. Tomorrow’s Canadian should be stronger given the sharp increase in the price component of . Thursday local time, New Zealand releases Q3 GDP. The third quarter was strong for many countries and New Zealand is no exception. 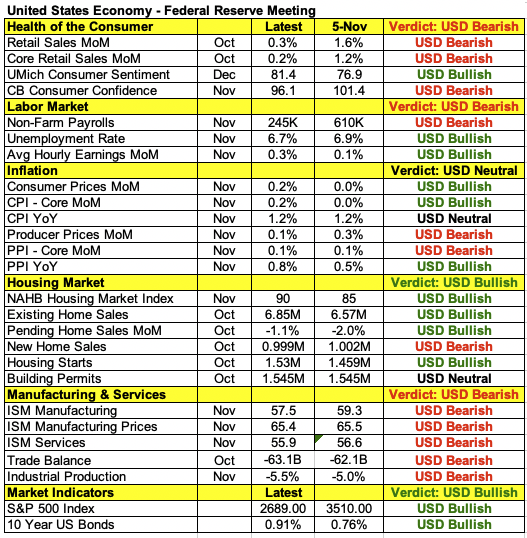 U.S. Data That Will Be Considered By Fed.