Amid the continuing bearish rally in the US bond market, the strengthened again, and futures for US stock indexes declined during today’s Asian session.

Investors continued to sell US government bonds after the publication of positive on the US labor market last Friday, according to which the number of jobs in February grew for the second month in a row, and the pace of their growth accelerated significantly compared to those observed earlier in winter.

The in February, according to a report by the US Department of Labor, fell to 6.2%, which is well below the high of 14.8% reached in April 2020, although it remains so far above the levels it was before the pandemic, when unemployment was close to the lowest levels in 50 years.

In February, the US economy created 379,000 jobs (versus a forecast of +182,000 and an increase of +166,000 in January) amid the weakening of the coronavirus pandemic and progress in the vaccination campaign.

Against the backdrop of the strengthening of the US dollar and rising government bond yields, quotes fell again during today’s Asian session. As of this writing, the pair is traded near 1693.00 mark, just above the important support level of 1685.00. Its breakdown will increase the likelihood of further decline in XAU/USD.

Investors are actively liquidating positions in gold, since the increase in bond yields, which bring passive investment income, makes gold less attractive. The strengthening of the dollar also negatively affects the XAU/USD pair.

The Fed’s statements were unable to contain the growth of government bond yields, which means that gold is likely to remain under pressure. Federal Reserve Chairman Jerome Powell, speaking last week, said the Fed was monitoring the rise in US Treasury yields. However, Powell did not signal possible Fed intervention.

Thus, gold, which does not have investment income, is gradually losing its attractiveness, especially against the background of growing expectations of an increase in real interest rates and a decrease in the need for defensive assets. 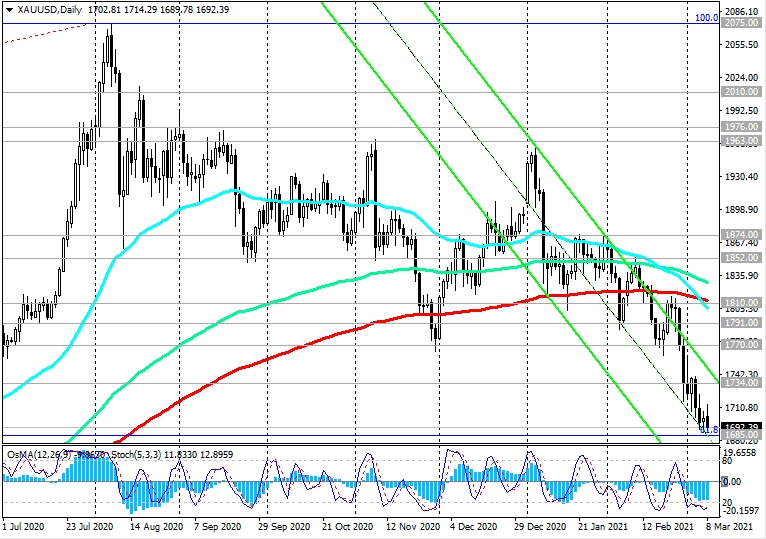