Traders are still digesting the surprising outcome of Thursday’s, wherein the central bank announced that it would start purchasing bonds at a “significantly higher pace” over the next quarter in an attempt to get ahead of rising yields and (potential) increasing price pressures in the coming months.

Beyond its immediate implications for European assets, this decision underscores different approaches to THE biggest question vexing global central bankers this year: Is the coordinated rise in bond yields across the globe signaling excessive inflation in the coming quarters?

While the ECB appears to think the answer to that question may be “yes,” recent comments from Federal Reserve policymakers suggest that they’re still skeptical of a sustained uptick in inflation. With the US central bank scheduled for their semi-quarterly on Wednesday March 17, traders will be eager to see if the Fed’s resolve remains steadfast. To that end, a couple of solid to outright strong long-term Treasury bond auctions this week could convince the central bank to hold off on any additional stimulus at this month’s meeting.

This month’s meeting will be accompanied by the quarterly update to the central bank’s economic projections, and given the recent shifts in yields and market-based measures of inflation expectations, the most important data point to watch will be the central bank’s expectations for interest rates in 2022 and 2023 (the infamous “dot plot”).

In their December projections, only one Fed policymaker expected interest rates to rise off the current, essentially 0% interest rate level by 2022. If several more policymakers indicate an expected rate hike as soon as next year, or if the median member starts to expect a hike in 2023, it would show that US central bankers may not be as united and sanguine on price pressures as they’ve appeared to date.

In addition to interest rate expectations, the market will also scrutinize the central bank’s economic projections. Given the just-passed fiscal stimulus bill and rapid progress of vaccinations in the country, the Fed’s December forecasts for 4.2% economic growth and a 5.0% at the end of the year look overly pessimistic; they are likely to be revised higher, though it will be interesting to see if those revisions also “pull forward” previously-expected economic improvements from 2022 and 2023.

Finally, any changes to the official monetary policy statement, as well as the general tone of Fed Governor Jerome Powell’s , could provide insight on the Fed’s plans moving forward. Expect media members to grill Powell on the definition of “substantial progress” toward the central bank’s employment and price stability goals in an attempt to glean insight into when bond purchases could cease and interest rates could rise.

Given its previous premature attempts to tighten policy, the central bank may be most likely to remain in “lower for longer” / “wait and see” for this meeting, with any evidence of rising inflation characterized as transitory for now.

As for the world’s reserve currency, the has caught a bid so far this month, albeit off a relatively low level. If the Fed makes no changes to policy and expresses no immediate concerns about inflation, it would serve as a proverbial “green light” for traders to push bond yields, and by extension the US dollar, higher. Meanwhile, any explicit concerns about or hints at stepping up bond purchases like we saw from the ECB could hit the greenback and drive the dollar index lower. 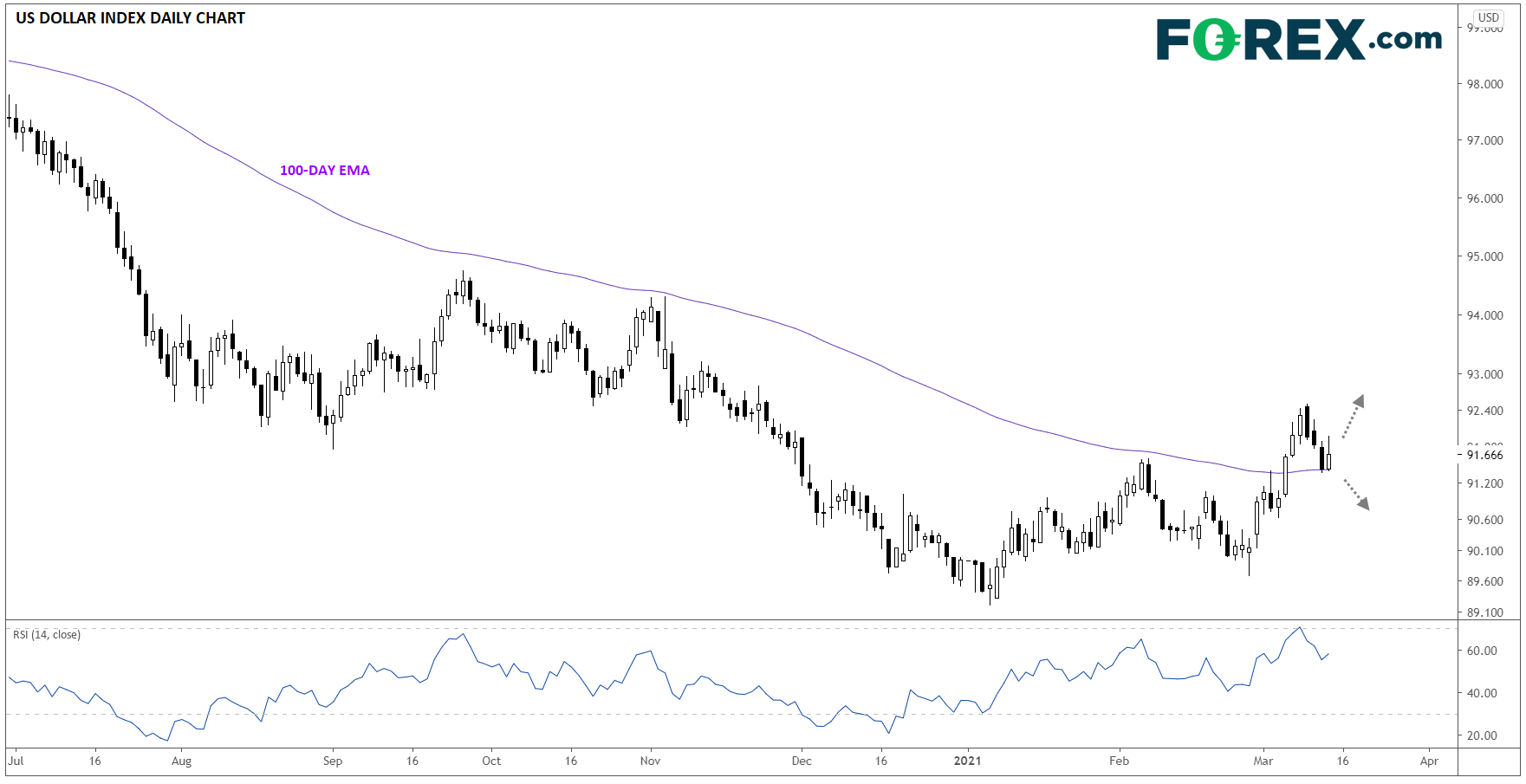