Demand for risk on global markets received renewed strength with confidence about large-scale stimulus in the US, as well as signs of a recovery in manufacturing activity and export earnings in Europe and China. Asian markets are reaching new highs with increased trading volumes, an additional bullish sign pointing to fresh money injections.

In the FX market, there is strong demand for the British pound and the Australian dollar. and have returned to highs of more than two years, at 1.37 and 0.78 respectively, from which they pulled back earlier in January. These are all signs of more positive sentiment, in addition to the highs in Asian and US key stock indices.

managed to stay above the 50-day moving average, finding buyers on the downside at 1.2070 but is not yet able to go higher. The local dispute between bulls and bears may be resolved by today’s ECB meeting. 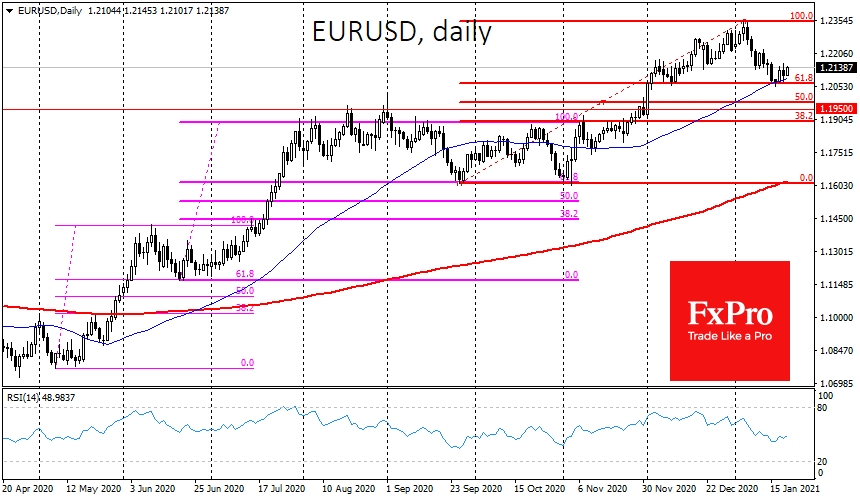 EURUSD managed to stay above the 50-day moving average

No policy changes are expected from the ECB, but investors and traders will listen to the tone of the comments made by bank president Christine Lagarde, as the outlook for the Eurozone economy has been worsening due to the latest pandemic wave.

Lagarde’s readiness to provide new stimulus, coupled with warnings of rising risks of a second recession, could spur purchases of government bonds in the region and support inflows into the euro.

This same approach was preferred by the Bank of Japan this morning. It is worth noting that in times of heightened economic uncertainty the big three central banks – the Fed, the ECB and the Bank of Japan – prefer to move in the same manner.

The ECB does not act aggressively by easing its policy, which avoids oversaturation of the single currency in the markets. On the contrary, traders often increase buying of the euro at the announcement of broader support as it is suggestive of stronger economic growth in the future. Thus, the soft tone of Lagarde’s comments may well return the euro to the uptrend it formed in May.

An alternative scenario would be triggered should the euro fall below the 50-day average, marking a break in the upward trend, targeting the pair at 1.1900-1.1950.