Weaker-than-expected U.S. data eased concerns about the U.S. economy overheating and drove the lower against most of its peers Wednesday. The euro and pound benefited from the weakening greenback and both and ended the trading day in higher territory.

Despite the softer-than-expected CPI figures, inflation is poised to accelerate in the months ahead driven by stronger demand and pandemic stimulus. Federal Reserve officials, on the other side, have brushed off inflation concerns and expect any pickup to be transitory.

The next high-impact event will be the European Central Bank policy  which is due today at 12:45 GMT followed by President Christine Lagarde’s press conference at 13:30 GMT.

ECB policy makers must decide whether rising yields pose such a threat to the EU economy that they have to take action. No change is expected to the deposit rate of -0.5 percent and even a decision to extend the central bank’s 1.85 trillion-euro pandemic bond-buying program beyond the current end-date of March 2022 looks unlikely today. Instead, the focus will be on the ECB’s rhetoric. If there is any hint that the ECB plans to deploy the flexibility instrument in order to contain yields, the euro could fall towards 1.1820 and 1.1750.

Also, if Lagarde stresses that higher bond yields are triggering an unwarranted tightening of conditions, it should be taken as negative for the euro.
However, ECB policy makers are likely to be cautious with their language and if today’s statement turns out to be less dovish as expected, the euro could rally.

Looking at the technical picture, there is a chance for a potential bull breakout today, provided that the euro takes out the 1.1960-hurdle. Above that level a potential inverted head-shoulders-pattern could be in play, targeting at higher price levels around 1.2050. The pattern, however, becomes void with a downside break of 1.1850. 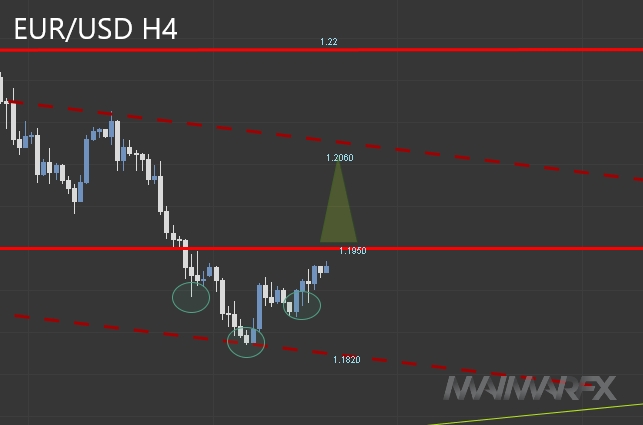 Disclaimer: All trading ideas and expressions of opinion made in the articles are the personal opinion and assumption of MaiMarFX traders. They are not meant to be a solicitation or recommendation to buy or sell a specific financial instrument.