Markets are retreating from the highs reached earlier in the week as some players decided to put profits aside.

Most stocks bourses in Asia and the USA rallied sharply earlier this week, reaching new multi-year or all-time highs before moderately falling back today.

Markets have absorbed positive news and expectations, and are looking out for new impulses to rise or fall. 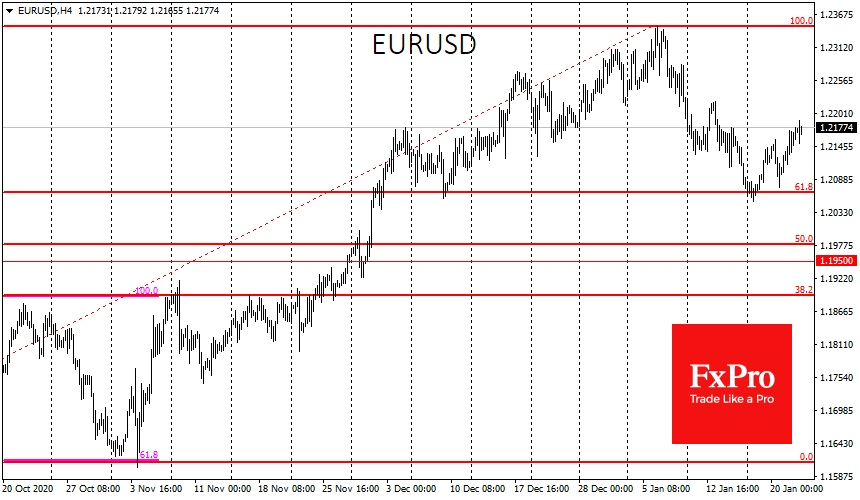 EURUSD enjoyed support on the dip under 1.2050

This week , which has been under pressure since the beginning of the month, enjoyed support on the dip under 1.2050. On Thursday it gained 0.5%, supported by some tweaks in the ECB’s comments which suggested that the asset purchase programme could wind down ahead of schedule in favourable financial conditions.

This could well be a concession to the hawks at the ECB. However, the hawkish approach has already damaged the central bank once and undermined economic recovery after 2009. Back then, interest rates were raised with an eye on inflation, but in isolation from the fractured finances of nations and a bleeding economy.

But so far, there are few signs that the economy and financial markets can live without external support in the foreseeable future.

In this situation, another problem becomes the focus: What else could push markets upwards? Is the scenario too favourable for quotes? And will there be any disruption to vaccination roll-outs?

Even more difficult questions lie in the financial strength of companies: how long can they hold out this time, and will government support be as ambitious?

It would be fair to say that government spending and central bank measures have managed to get the economy’s engine going in 2020. The markets have behaved as if the economy was in a period of rapid growth.

In the coming days or weeks, there could be a convergence of expectation and reality. This process could be very unpleasant for the stock markets, promising many challenges on the way to strengthening.

In the FX market, this process promises to hurt emerging market currencies and end the corrective bounce after last quarter’s explosive growth. Equity markets could also come under pressure both today and early next week.

In the event of a sustained build-up of tension, the Fed will have to reiterate its willingness to support the economic recovery by pouring out new money at the end of next week’s meeting if market volatility continues to increase.