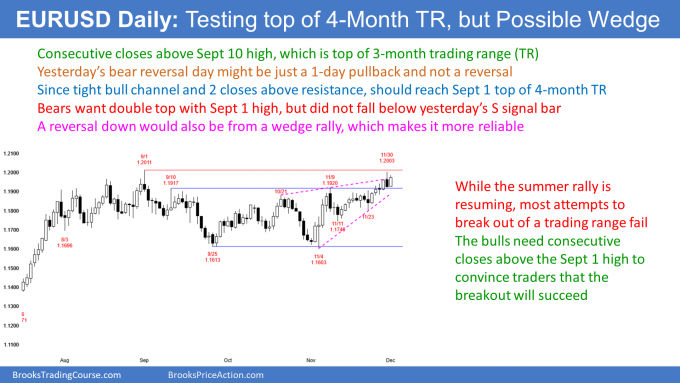 Even though yesterday was a bear reversal bar, it was the 2nd consecutive close above that resistance. That increases the chance that the rally will continue to above the September 1 two-year high.

But if today or tomorrow reverses down to below yesterday’s low, the bears will have a micro double top. That would also trigger the sell signal for a wedge rally to a double top with the September 1 high. Traders would then look for a couple legs down to at least the November 23 low.

The 5-minute chart of the EUR/USD Forex market opened above yesterday’s low and reversed up in a tight bull channel. There was a 20-pip pullback 5 hours ago, and that could be the start of a trading range. The bears will start to look for scalps on reversals down. If a reversal down is strong, the bears will hold for a swing down. They will hope that today will form a reversal day, and a double top with yesterday’s high.

However, the day is still a bull trend day and it is, therefore, easier to make money buying pullbacks. The bulls have already accomplished all that they need to do. That reduces the chance of a big rally from here.

They prevented the sell signal on the daily chart from triggering, and they reversed most of yesterday’s selloff. They would simply like today to close near its high. That would also be the 1st close above 1.20 in over 2 years. Today would then be a buy signal bar for tomorrow.

What happens if today closes in the middle of its range? The bulls would be disappointed and the bears will be hopeful. It would increase the chance of another sideways day. The chart would be in a small Breakout Mode pattern. Traders would still be deciding between a break above the September 1 high and a reversal down.