The Forex market on the daily chart triggered a Low 2 bear flag sell signal yesterday when it traded below Monday’s low. However, yesterday was a small bear bar with a big tail below. That means there was hesitation. This is so far a weak bear breakout. Also, the context was bad. While EUR/USD had been in a bear trend since Jan. 6, it reversed up last week from a wedge bottom. 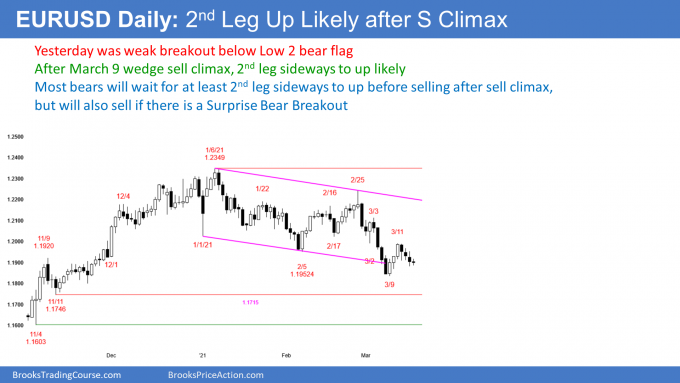 There were three consecutive bull bars closing near their highs. Traders know that usually will lead to a second leg sideways to up. Consequently, many bears are not eager to sell yet, because they expect at least one more leg sideways to up. However, if there is a surprisingly big bear bar today or tomorrow, they will conclude that the bear trend is resuming and they will begin to sell again.

Since the March 9 sell climax was extreme, and it came in a three-month bear trend, there is an increased chance that the short covering could last a couple weeks and reach the March 3 top of the most recent leg down. However, this three-month selloff is coming from a clear wedge top on the weekly chart. Therefore, even if the EUR/USD rallies from here, the odds still favor a continuation down to the Nov. 4 higher low at some point in the next few months.

There is an FOMC announcement today at 11 a.m. PST. It sometimes leads to a big move in either direction, and there is usually a sharp move up and down within the first few minutes after the announcement. Day traders should exit positions ahead of the report, and wait at least 10 minutes afterwards before trading again.

The 5-minute chart of the EUR/USD Forex market has been in a tight trading range overnight. It has been difficult for day traders to make even 10 pips on their scalp attempts. They will continue to scalp reversals in both directions, unless there is a series of strong trend bars in either direction.

The bears want today to close below the open. Today would then be a fourth consecutive bear day on the daily chart. That would increase the chance that the bear trend is resuming.

The bulls want a second leg up on the daily chart. They need to get strong bull bars to encourage traders to buy. They, therefore, want today to close near the high of the day.