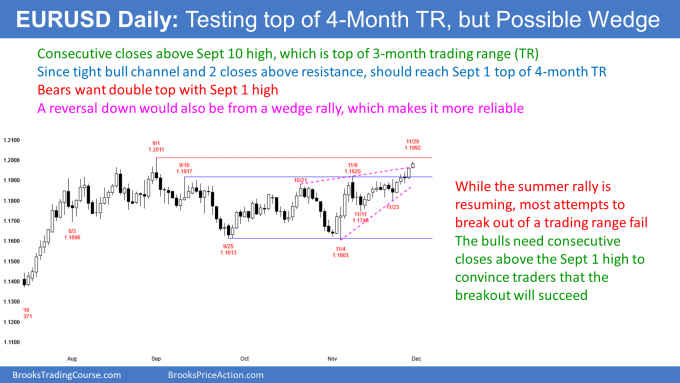 It is important to remember that most breakout attempts fail. The rally from the Nov. 4 low has the best chance since August.

Even though the summer rally is resuming, traders should expect a disappointment. Yes, it probably will break above the September high, but will it continue up to the 2018 high? If it does, it will probably not do it in a straight line. It might test the Nov. 11 low first.

If the rally from the Nov. 11 low contained many big bull bars closing on their highs, traders would expect a quick move up to 1.25. But that is not the rally that we have at the moment. It is more likely that there will be a 2 to 3-week swing down from around the September high.

The rally from the November low is in a wedge bull channel. The 1st leg up in the channel began before the final low in the selloff from the September high to the November low. Also, the shape is not good. It will therefore not attract a lot of aggressive sellers. But if there is another pullback or two in December, the wedge could have a better shape. That couple lead to a pullback to the November 11 low.

One final point. There is a tendency for currencies to either breakout or reverse around the 1st of the year. Therefore, the EURUSD might wait until then before making its next big move up or down.

The 5-minute chart of the EUR/USD forex market opened 1 pip below Friday’s high and rallied. But the rally has only been 30 pips. Most of the session has been within trading ranges.

The bulls would like the rally to continue up to the Sept. 1 high, which is only 19 pips above the current session high. But the day’s small range is a sign of a lack of energy. Therefore today will probably not break strongly above that resistance.

At a minimum, the bulls want today to close above the open. There would then be consecutive bull bars on the daily chart closing above the top of the 3-month trading range that began with the September 9 high. Traders would then expect at least a small break above the September 1 high this week, which is a 2-year high.

The bears want the opposite. They want today to be a reversal day and close on its low. Today would then be a sell signal bar on the daily chart for a failed breakout above the Sept. 10 high.

At the moment, day traders have only been buying. But they have not been buying aggressively. If the EUR/USD continues to go sideways, day traders will begin to look to short as well, looking for a possible reversal day.

Since the EUR/USD is just below major resistance, there is an increased chance of a big move up or down before the end of the session. If there is a big move, up is more likely.