The single currency rose sharply on Tuesday evening, taking to 1,2080, new highs since April 2018, due to a difference in macroeconomic data. The sharp jump broke the established trading range and potentially opened the way for growth in the area of 1.2000-1.2500. 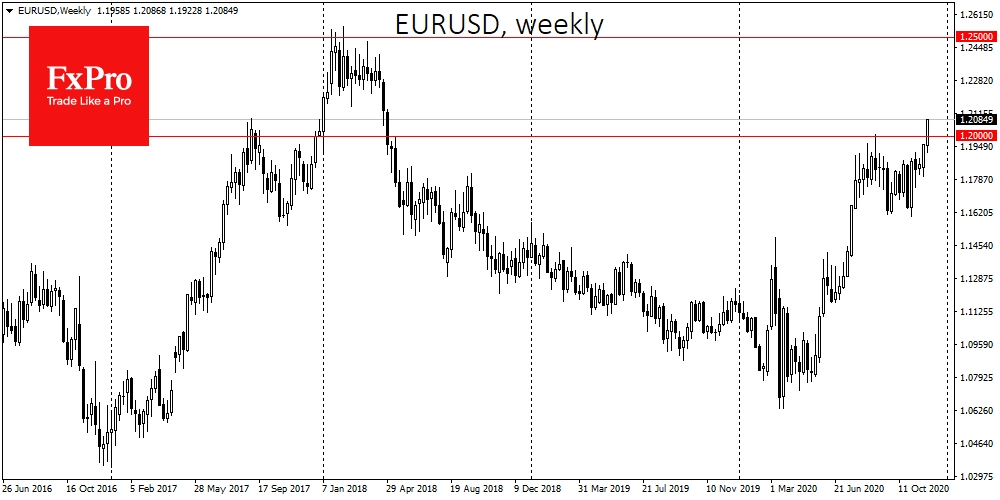 Germany data showed a 39K drop in unemployment during November after a 38K decline a month earlier. These figures are significantly better than the expected 9K average increase despite the second wave of coronavirus in Europe and a tighter lockdown in November.

Also, the final Manufacturing PMI came out at 53.8, better than the initial estimates (53.6), reflecting a continuation of a relatively strong recovery in business.

The shows much better relative dynamics but did not meet expectations due to a sharp deterioration in the employment component of the index. The Manufacturing ISM fell from 59.3 to 57.5 in November, raising questions about the recovery of the labor market in the run-up to Friday’s employment report.

Comments from the top US financial officials contributed to the weakening of the dollar. Speaking to Congress, outgoing Finance Minister Mnuchin pointed to the need for more extensive new business incentives to enable small businesses to stay afloat until vaccines are widely used. Nominated Finance Minister Yellen calls for decisive action to prevent the economic “devastation” of the US. Fed Chairman Powell, for his part, also stressed the commitment to incentives against the backdrop of a dampening recovery and discussions of a support package from legislators currently stalled.

The euro was the hero yesterday, but this leadership is unlikely to please the ECB. They had previously noted with dissatisfaction the negative effects of the growth of the euro, which is damaging export potential and creating deflationary risks in the economy. Several observers are expecting measures to curb its growth as early as next week’s ECB meeting.

However, the ECB has seldom been strong enough to reverse the rise in the euro. More often than not, its actions have been very time-consuming. Besides, the Fed will have another week to December 16 to present its response to the economy.