The is developing an offensive, particularly pronounced in pairs with the and . In both cases, this is due to stricter yield management by national central banks compared to the Fed’s stance.

With such a market reaction, we could well be talking about a return of carry-trade: a trading idea that was most prominent before the global financial crisis 13 years ago. 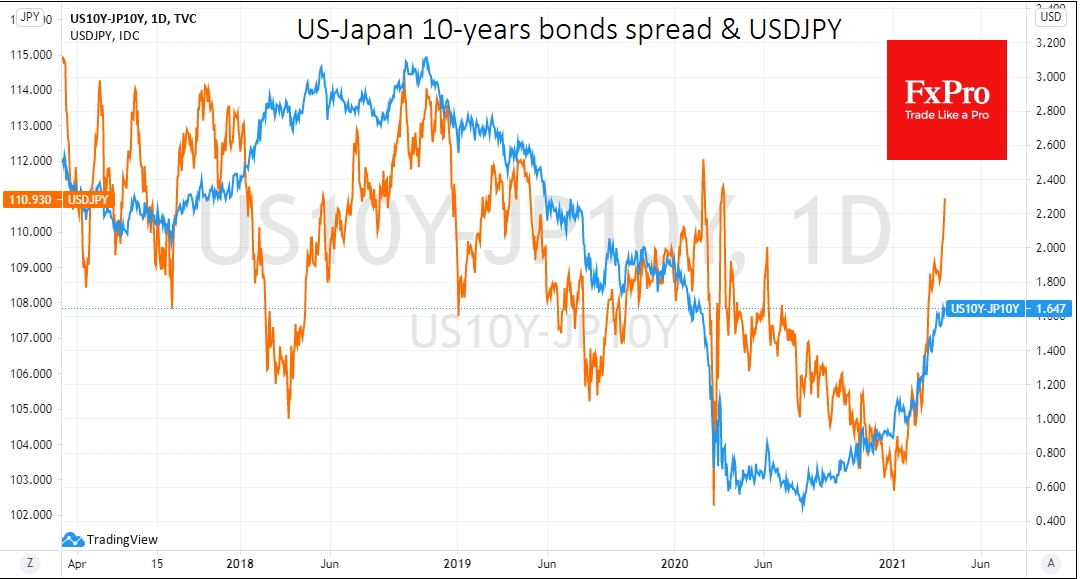 Investors are receiving much more attractive yields on long-term US bonds than on the corresponding Japanese bonds. The yield spread of yields has widened from 0.9 to 1.64 percentage points so far this year. This, in its most active phase, was the main reason for the rally today from 102.6 to 110.90, which is more than 8%.

The markets are waiting for the Bank of Japan to update how much more bonds it intends to purchase in April. The volume increase would be a repeat of the ECB move, which we have seen earlier in March. Should that be the case, yield spreads might widen, pushing USD/JPY further up with a near-term milestone at 112. The pair could then aim for the 114-115 area, where the last four years have repeatedly reversed to a decline, although the spread was then as high as 3 p. p. at one point.

It is worth noting that a rising spread between US and German government bond yields, as in Japan, has been observed in the markets since July. However, it has only had a noticeable impact on the currency pair this year, pushing back from 1.2330 at the start of January to 1.1700 now (-5%).

At the moment, the spread had returned to pre-crisis levels but is still a long way from its late 2018 peak, when it reached 2.8p and later stabilised at 2.4p.

This does not at all mean that EUR/USD will fall another 5%, reaching 1.1100-1.1200. Rather sooner than later, it will lose sensitivity to these changes, finding support just below 1.1500.

That said, the difference in approach between central banks remains clear and significant (more softness from the ECB and BoJ versus a closed eye from the Fed), which promises to soon provide further support to the dollar in pairs with the euro and the yen.