The plunged 1.3% at 5 AM EST Monday, wiping out the gains it took 12 sessions to muster. This is the British currency’s worst tumble in nearly three months, since the 1.5% drop on Sept. 10.

Traders this morning were said to be pricing in a , following reports in British tabloid the Sun, that Prime Minister Boris Johnson was prepared to end negotiations “within hours” in response to “outrageous” EU demands.

While we understand why such news would prompt a bearish posture on Cable, we find it difficult to accept the notion of “pricing in” what is considered to be a significant crisis for the UK’s economy by such a relatively minor decline. Consider, after all, the strides made by the GBP/USD pair since it plunged to $1.145—its lowest level since the 1980s—after that fateful referendum in June 2016.

To be sure, both the BoE and Goldman Sachs warn that a no-deal Brexit will be more detrimental to the British economy than COVID, which is really saying something. We do find it noteworthy, however, that the decline ‘just so happened’ to come after the price reached two crucial technical price junctures: a resistance level since mid-2018 and the long-term downtrend line since November 2007. 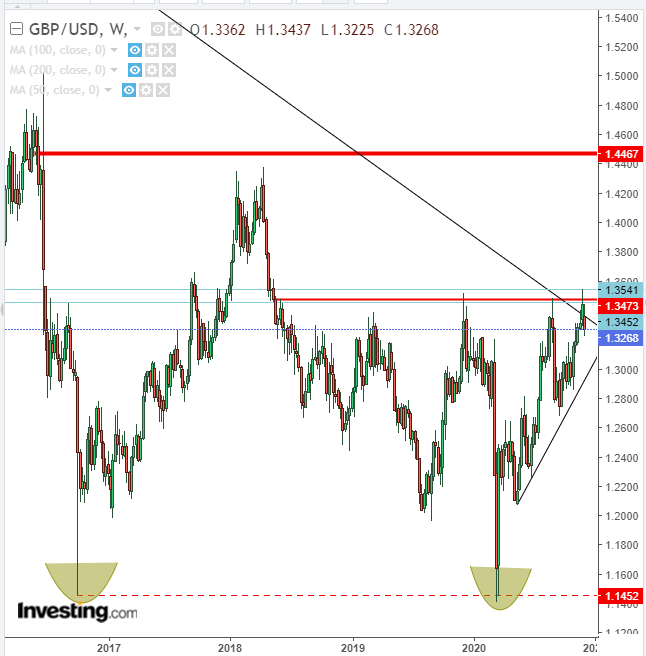 The obvious bet is to short the pound. However, we mistrust obvious bets, which tend to feed contrarian traders.

So let’s consider the impact on sterling—which underperformed all the major currencies this year—if there were, in fact, to be a Brexit deal. What might that look like on the chart?

The pound is currently retreating from the nexus of resistances we mentioned above. If the pound does best this price level, it will rise above its uptrend line for the first time in 13 years and complete a massive H&S bottom, in place since mid-2018.

That’s not all. Should that scenario follow through, the implied objective of the H&S would be the completion of an even larger, double-bottom, since mid-2016.

And that would be poetic justice: if the final closure of four years of Brexit uncertainty, which pushed the pound from 1.50 to around 1.15, were to put the UK currency back on track for complete rehabilitation. We’d see that as a seriously successful contrarian bet for those who are patient.

The trick, as always, for entering a contrarian trade is meticulous money management, considering the whipsaws that could hit on any headlines related to this volatile theme.

Conservative traders would wait for the supply-demand balance to make trader intentions clear, by either bottoming or falling below the medium-term uptrend line since May.

Moderate traders would buy if the price returns to the uptrend line and confirms it with a rebound, at around the 1.30 level, or if it bottoms, surpassing the 1.35 level.

Aggressive traders would short if the price retests Friday’s highs. However, they’d go long upon nearing the uptrend line, only after planning their trade and committing to their plan.