Except for corrective rallies, we have been consistently bearish on the for about half a year. However, we’ve been wondering whether the dollar is consolidating, and possibly reaching a bottom. There’s a bearish and bullish fundamental case to be made.

From a bearish perspective, recent, ongoing efforts by both the Fed and US legislators that have produced record easing and the most supportive fiscal policy in history because of COVID-19 are weighing heavily on the USD. As well, the lowest interest rates on record for the US mean no payout for dollar holders. Plus, the massive stimulus will exacerbate debt, elevating it potentially to more than the sum of the entire economy next year.

In addition, as of the end of December, bearish bets on the dollar are at their highest since 2011.

On the other hand, when a position becomes too popular, we can’t help but feel uncomfortable. So while most people are convinced there’s a USD crash , our spider sense has started tingling. Where many see a forgone conclusion, we see complacency. Still, with most everyone on the same side of this trade, and few traders bullish on the dollar, it’s hard to see where buyers may come from unless they’re short-sellers getting nervous and trying to cash out, which would push the price higher…at least for a time.

So why would the dollar rise now? The US continues to have higher interest rates than the EU, making Treasuries more appealing than their European counterparts. And though the Fed has been saying consistently that it won’t increase rates until the end of 2023, it’s not like the US central bank hasn’t changed its mind before. If inflation rises, the Fed won’t be able to ignore the situation and would be forced to raise rates to keep it in check.

Plus, a strengthening US economy would attract foreign capital to US equities, boosting the dollar, as would a global recession which would make Treasuries—with their reputation as the safest bonds in the world—more attractive to foreign investors, who would have to purchase dollars to obtain those Treasuries.

So which outlook is correct? Naturally, we can’t know right now. However, we can try to identify the forces of supply and demand for some clues. 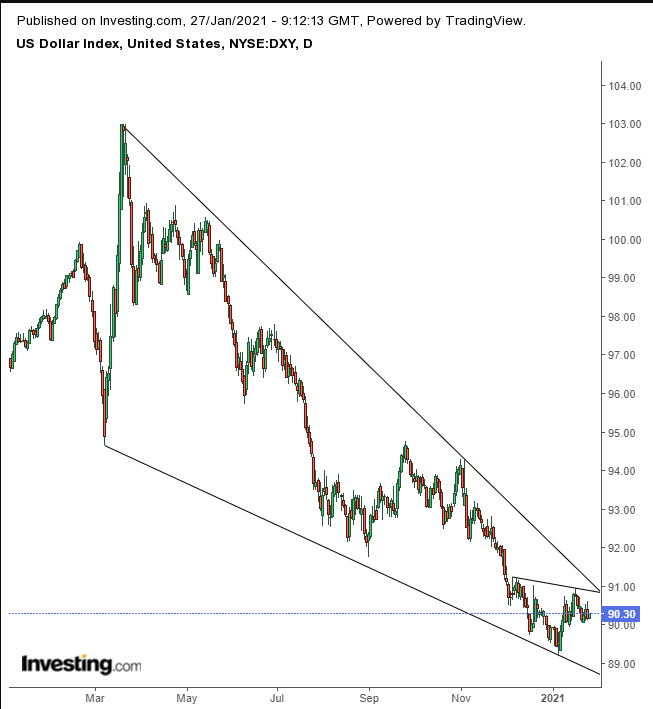 The greenback is trading along a small H&S bottom, whose upside breakout would include the completion of a massive falling wedge—whose apex lines up with the 2018 lows—potentially buoying and increasing upside momentum, returning the price toward its March highs.

Conservative traders should stay put until either the H&S bottom/falling wedge completes or fails. A successful completion in this risk category would include a close above 95, followed by a base. A failure would be established if the price closed below 89.00 and found resistance thereafter.

Moderate traders would wait for the upside breakout to close above the Dec. 7 high and find support in order to buy, or wait for a close below the 89 level which should trigger an immediate sale.

Aggressive traders can take a contrarian, long position, provided they understand and accept the risk of taking a trade against the trend and before a breakout that may never materialize. We do not know that a breakout will take place; we’re only betting that if it does, the DXY will likely keep climbing.

Risk management is essential, and here’s just an example:

Author’s Note: This is just a trade sample. The body of the post is the analysis. Even if it’s correct, the sample may fail. Your budget, timing and temperament will impact the odds of its success.

The analysis may be wrong. We do not know what will happen in the future. Remember that trading is nothing more than navigating statistics, or in layman’s terms, managing luck.