Exactly two weeks ago, the dollar had bottomed. The USD fell for the subsequent four days.

But today it looks like the decline didn’t weaken our bullish call on the global reserve currency. In fact, it may have strengthened it.

The fundamental trigger for the greenback’s rise is the expectation that unprecedented monetary and fiscal policies in response to the economic ravages of the pandemic will infuse the economy with inflation, for the first time in 12 years and counting.

As opposed to stagflation—when inflation rises while output declines—an infusion of inflation, often referred to as reflation, is an increase in output after a dip in the business cycle.

This is a good kind of inflation, not the bad kind which eats away at the dollar’s value, while not increasing the size of the economy. Rising prices would allow companies to increase profits, which would then encourage them to invest and expand, creating more jobs. Expanding employment fuels consumption, further boosting prices which keeps the economic cycle moving.

It’s expected that once inflation rises, the Fed will have to finally hike interest rates, to tighten liquidity, so that the economy doesn’t overheat. When the Fed raises rates, the yield on the dollar rises accordingly, making it more attractive, thereby increasing its demand.

The outlook for rising rates is what’s been driving the current selloff of Treasury notes, as investors wait for new issues with higher yields. Escalating yields increasing pressure on equities, as the higher the secure return on Treasuries becomes, the more likely they would be to draw away capital from the most expensive equity market in history.

A stock selloff would further increase demand for Treasuries because of their safe haven status, which would thereby also boost the dollar via foreign purchases. 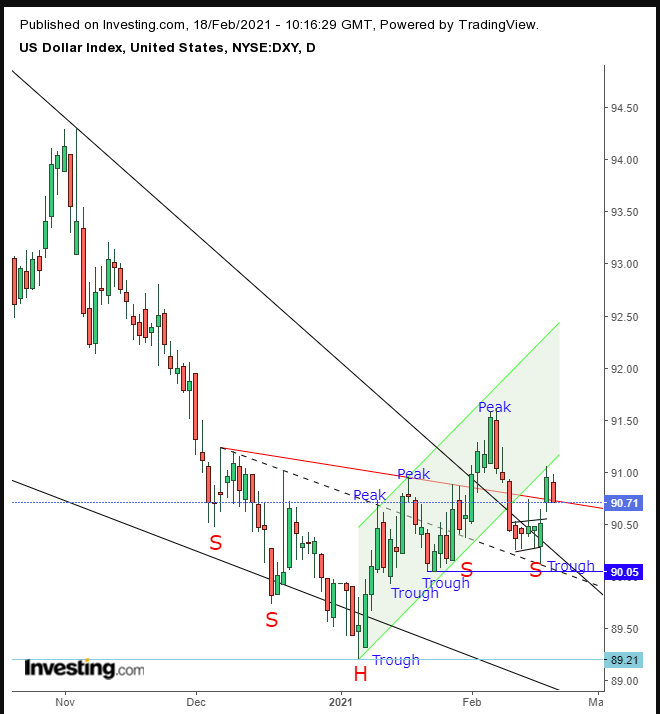 The dollar has been falling today, yet it found support by the red neckline of its H&S bottom, for now.

Previously, the price blew out a rising flag, which had a downward bias following the preceding plunge, especially a drop that forced it back below the neckline of the H&S, the rising channel since the Jan. 6 bottom, and back into a falling wedge. 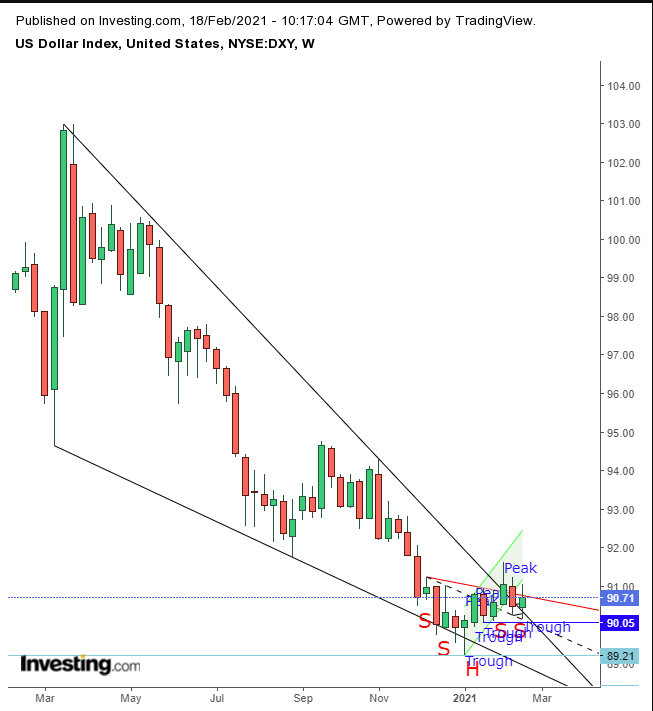 Even though the price fell out of its short-term rising channel, it maintained the rising peak-trough trend. All this aggressive activity—as the price nears the wedge’s apex—is indicative of its technical significance, as bulls and bears wrestle for dominance: whoever pushes the other out of the wedge’s bound is the victor.

Note that the Feb. 16 price, the last day the flag was in play, approached the Jan. 22 trough, but then shot back up, to close within the flag. This demonstrated both the integrity of the previous trough, as well as the significance of the flag, rendering its failure meaningful, turning it into a slingshot in the opposite direction of its initial destination.

Conservative traders should wait for a new high above the Feb. 4 peak, then wait for a take-profit dip that finds support.

Moderate traders could also wait for the same new peak in the short-term uptrend, even for the next decline, for a better entry, if not for confirmation of the trend.

Aggressive traders would enter a long position at will, provided they understand and accept the risk and are prepared accordingly with a sound trade plan.