It’s a big week for the financial markets. The Congressional hearings for Janet Yellen’s confirmation as Treasury secretary began today. (There’s no guidance on how fast the panel will vote on her nomination.) Tomorrow, Joe Biden will be sworn in as the 46th President of the United States. There are three central bank monetary policy announcements, PMI reports from countries around the world and Australia’s labor market report. With less than 24 hours to go before Trump leaves office, investors are optimistic. The rally in equities and currencies shows little concern about violence and punishing policies. The traded higher against all of the major currencies except for the . Yellen is expected to be confirmed easily and her initial comments reinforce the Biden Administration’s focus on Main Street over Wall Street. Investors are looking for generous fiscal spending. She also confirmed the administration will not go soft on China, warning that it is prepared to use its full array of tools to challenge the Asia Giant’s “abusive, unfair and illegal practices.”

Before the inauguration begins, UK and Canadian consumer price reports will be released followed by the Bank of Canada’s . Fuelled by low interest rates, inflation has been rising slowly across the globe and we are looking for those signs in Wednesday’s UK and Canadian CPI reports. However, even if prices in Canada increase, as suggested by , some market participants are looking for a micro cut from the central bank. With interest rates at 0.25%, a micro cut would reduce interest rates less than a quarter point.

The big question is what are the odds of a micro cut from the Bank of Canada? We know that the central bank is not a fan of negative interest rates. In November, Governor Tiff Macklem suggested further easing or “a lower floor” could help the economy if it weakens further. According to the table below, an aggressive second virus wave caused widespread deterioration in the economy at the end of the year. Canada reported for the first time since April, growth stagnated and manufacturing activity contracted. The January numbers should be just as ugly.

However, when the BoC left interest rates on hold in early December amidst surging new virus cases and renewed lockdowns, it was cautiously optimistic, saying that vaccine developments provide reassurance. It warned that it would be a choppy trajectory and that’s precisely what we’ve seen. With that said, are on the rise and the prospect of a post-vaccine recovery should drive prices even higher. We see only a 30% chance of a micro cut. Instead, the BoC is more likely to reiterate that low rates are here to stay. With vaccine shortages, we expect the central bank to err on the side of caution, warning about ongoing uncertainty and keeping the door open to easing. If the BoC cuts, will spike to 1.28. If it leaves rates steady, like we expect, CAD could rally in disappointment. 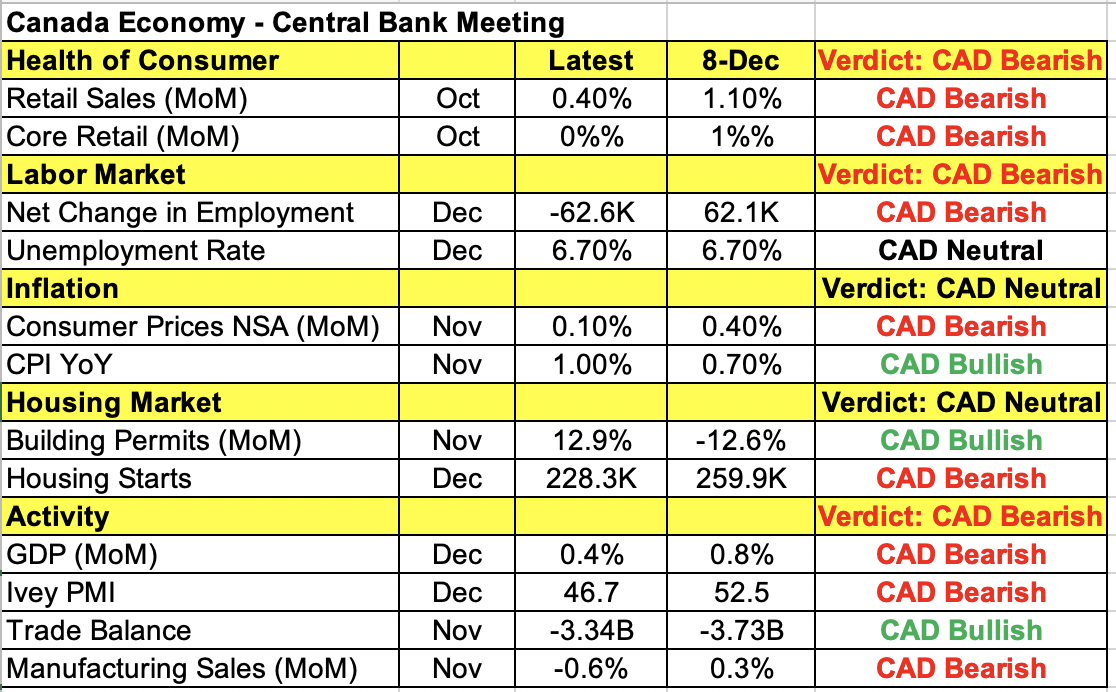 The best-performing currency today was the which rallied on stronger investor optimism. Despite the rising number of virus cases and reports that German Chancellor Angela Merkel wants to extend the lockdown to mid-February, investors are growing less pessimistic, according to the ZEW survey. This largely has to do with strength in the export sector and vaccine distribution. The euro’s rally suggests that this strength could carry over to Friday’s Eurozone PMIs. , the and dollars also followed equities higher.