The recovery from last week’s equity slide continues today. In Asia Pacific region, Taiwan and India led with more than 2% gains. Stepped fiscal efforts, the establishment of a bad bank, and privatization efforts are bolstering Indian shares. Europe’s Dow Jones gapped higher today and has recouped around half what it lost last week. US shares are trading higher, and a gap higher opening is possible. Benchmark yields are firm, with the US Treasury near 1.10%.

European yields are 1-2 bp higher. Indian bond yield is up another 5 bp (to 6.11%) after rising 16 bp yesterday. The greenback is mixed but has strengthened in the European morning. The has taken out its recent lows, and the looks poised to do the same. Emerging market currencies are mostly firmer, led by the liquid and freely accessible , , , and . The JP Morgan Emerging Market Currency Index is appreciating for the fourth consecutive session. is giving back most of yesterday’s gains but remains within its pre-weekend range (~$1839.6-$1875.7). March made a smart recovery yesterday after initially falling through its pre-weekend low and rose above last week’s high. Follow-through buying has lifted the March contract to almost $55, its highest level in a year.

The Reserve Bank of Australia left rates on hold and reiterated that rates will remain low for a prolonged period. Governor Lowe was explicit. There is no need to raise rates until inflation is within the 2-3% target, which does not seem likely until 2024. It will extend its bond purchases by A$100 bln the current program expires in mid-April. Even with the central bank meeting out of the way, Australia’s economic calendar in the coming days is jam-packed with the final and PMI, , and . Lowe speaks first thing tomorrow in Canberra, testifies before Parliament, and the RBA will issue is a formal statement on monetary policy.

What does it mean that the UK formally requested to join the Comprehensive and Progressive Trans-Pacific Partnership? Apparently, the impact on the UK economy will be so small that the government has controversially declined to publish an assessment. Procedurally, Japan holds the rotating presidency, and New Zealand is responsible for access requests. The UK is the first. The UK signals its free-trade stance, now freed from the EU, while the CPTPP members see it as a confirmation of its legitimacy. It is the largest trade agreement without the US, China, or the EU. 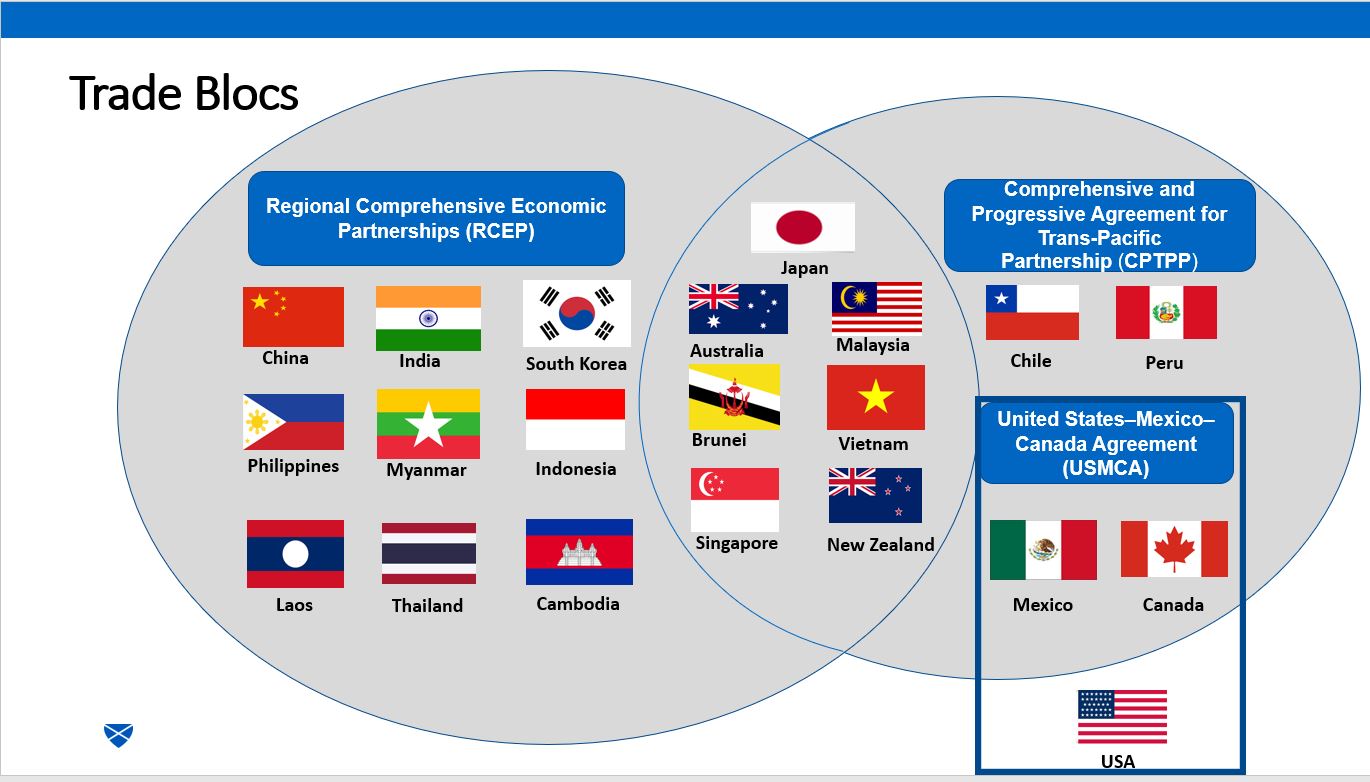 Japan sticks to the rhetorical hope that the US would, but this seems a longshot at best. The domestic economy and the response to the pandemic is the first priority of the new US administration. More broadly, it is difficult to envision the world’s largest economy apply to join someone else’s trade agreement. Beijing does not share such sensitivities, and Secretary-General Xi seemed keen to participate at the end of last year. Being a member would give China almost a seal of good housekeeping approval of its trade practices. That is the rub. CPTPP’s standards are too high for China to join. It would have to jettison its preferential treatment of state-owned enterprises, for example, and stronger protection of intellectual property would be required, along with other changes Beijing resists. South Korea, Taiwan, and Thailand have also expressed interest in joining the CPTPP.

The dollar rose above 105 yesterday, albeit barely, for the first time since mid-November. It continues to straddle it today, being confined to about a 10-tick range on both sides of JPY104.95. There was little response to news that the formal state of emergency covering part of the country responsible for about 60% of GDP until Mar. 7. The move does not appear over, and the next upside target is the JPY105.35 area and then JPY105.60, where the 200-day moving average is found. The dollar has not traded above it since last June. The is pinned on its lows, holdings just above $0.7600, where an expiring option is struck for A$1.2 bln. A convincing break would target the $0.7500 area in the coming days. Initial resistance is seen in the $0.7540 area. The dollar’s reference rate was set at CNY6.4736, a pinch above the median (Bloomberg) survey projection. It was, though the 11th session that the dollar’s reference rate was above the survey median. The PBOC injected funds again (third day), and last week’s squeeze has ended. The overnight repo rate fell more than 50 bp to about 2.25%, the lowest in a couple of weeks. It peaked last week near 3.33%, a five-year high. The continues to trade firmer than the .

, , and surprised with better than expected GDP figures. Italy came in as expected today with a 2% contraction following a 16% expansion in Q3. The net result was a 0.7% contraction on the aggregate level, a little better than forecast. Moreover, with the virus, slow vaccine rollout, and continued high level of social restrictions, there is concern that the euro area economy is contracting this quarter as well. Tomorrow, Markit is expected to confirm that the composite PMI on the aggregate level remained below the 50 boom/bust level for the third consecutive month. Recall that the US economy expanded by 4.0% (annualized).

In addition to the health and economic challenges, Italy’s simmering political troubles have yet to be resolved. Apparently, Prime Minister Conte’s effort to build another coalition with the same parliament is on the verge of failing. A report back to President Mattarella is due by the end of the day. Former Prime Minister Renzi, who withdrew his small party’s support for the government, precipitated the crisis, reportedly has supported the idea of a technocrat government, perhaps led by former Bank of Italy Governor and ECB President Draghi. Meanwhile, the League’s Salvini, who pulled out of the first Conte government, is advocating new elections. According to a weekend poll, about 40% of the public supports a new government led by Conte, but nearly as many (36%) prefer a different leader. About 28% favor a new election. Although we thought a cabinet reshuffle would be all that it took to preserve the government, we recognize that the options are getting narrower, and time is running out. So far, the market impact looks minor.

The has broken down. It has been pushed below the $1.2055 shelf that had been created. The next immediate target is the $1.20 psychological level and the $1.1975 area, which is the 50% retracement of the rally since the election. If sustained (which means that the $1.2055 area now acts as resistance), today’s break may suggest a larger topping pattern for the euro that projects toward $1.1750.  continues to be more resilient than the euro, and many are linking it to the success in rolling out the vaccine. After testing the couple year high set at the end of January, sterling sold off yesterday and settled North America on its lows (~$1.3655), but there has been no follow-through selling today. It is consolidating mostly below $1.3700. The euro is being pushed below GBP0.8800 for the first time since last May. There is little chart support ahead of the GBP0.8700 area.

The nonpartisan Congressional Budget Office forecast the US economy to grow at an annual rate of 4.6% this year based on policies as of January 12. That means that the $900 bln stimuli approved at the end of last year are included, but none of the new stimulus being debated or the economic impact of any of President Biden’s executive orders. Counter-intuitively, the CBO estimates that the four quarters’ growth would be closer to 3.7% due to the gains that occurred in Q3 20. Recall that last week, the IMF revised its forecast this year’s US GDP to 5.1% from 3.1%. This is still about the recovery from the economic shock induced by the pandemic.

Before the public health crisis, there was a concern that the US, alongside most high-income countries were facing weaker labor force growth, fewer new household formations, and weaker productivity growth. While the CBO may have turned more optimistic in the near-term, it became more pessimistic about the longer-term growth prospects. It warns that average growth this decade may only be about 1.7%. That means that it will take longer to absorb the slack in the labor market. It now sees the unemployment rate reaching 5.0% next year and on average remaining above 4% from 2026 to 2031. It averaged 3.7% in 2019. Many investors are worried about inflation, and last March and April’s decline will drop out, making for a dramatic rise ahead simply due to the base effect. The CBO is less sanguine. It does not anticipate a sustained increase of the headline PCE deflator above the Fed’s 2% (on average) target until Q2 24. The CBO also expects the yield to remain subdued, rising from around 1.1% in the middle of 2021 to 1.20% at the end of the year. ‘

The US and Canada have light economic diaries today. US January auto sales will trickle across the screens for much of the day. The Bloomberg survey’s median forecast anticipated sales at a 16.15 mln unit annual pace (seasonally-adjusted). Sales in January 2020 were at a 16.6 mln pace. Fed speakers include Kaplan, who spoke yesterday, Mester, who also speak tomorrow. Mexico reports December worker remittances, which have been strong. On average, they have been running about 10% higher than a year ago. In December 2019, workers abroad sent $3.12 bln back to Mexico. In December 2020, is expected to have been closer to $3.6 bln. By way of comparison, note that Mexico’s trade surplus averaged almost $2.9 bln a month last year.

The US dollar trading inside yesterday’s range against the , which itself was inside the pre-weekend range (~CAD1.2740-CAD1.2875). Within that range, the US dollar has pulled back, and with a recovery in risk appetites (rising stocks) and higher oil prices, the Canadian dollar’s roughly 0.4% gain puts it atop the G10 currencies today. That said, the greenback is finding support near CAD1.2780 and looks like it can return toward the highs. The US dollar also remains within last Friday’s range against the (~MXN20.0850-MXN20.60). It looks vulnerable to a test on the lower end of that range, which is about the halfway mark of the greenback’s upside correction that began near MXN19.55 on  Jan. 21. Mexico’s central bank meets next week, and many are expecting the central bank to deliver a 25 bp rate cut that would bring the target rate to 4.0%.