Skip to content
Against all odds, the climbed to its strongest level versus the U.S. dollar in more than two years. Not only was the single currency the day’s best performer, but it surged well above 1.20, rising to its highest level since May 2018. For many, the persistence of the euro’s rally has been perplexing as there was only one down day in the last six. However, we don’t need to dig deep to find drivers for the move:

There’s no coincidence that the euro’s rally coincides with broad-based U.S. dollar weakness. The may be up today, but it is still trading near 2.5-year lows. Concerns about a spike in coronavirus cases after Thanksgiving and Federal Reserve Chairman Jerome Powell’s promise to keep interest rates low until there are actual signs of inflation gives investors very little reason to buy U.S. dollars. We saw that clearly today as the greenback extended its slide against most of major currencies despite the whopping 11% rise in .

Stronger than expected data also lent support to the euro. Germany reported a surprise drop in unemployment rolls that helped ease the unemployment rate. for the Eurozone was revised higher, offsetting the sting of lower inflation. While the European Central Bank is widely expected to add stimulus next week, this plan was clearly telegraphed allowing investors to fully discount the move. Therefore, even though the prospect of ECB easing is negative for the euro, the lack of surprise may actually be positive for the currency.

Last month’s aggressive lockdowns in Europe are finally bearing fruit as there are signs that Europe’s COVID-19 outbreak is slowing. New virus cases in France fell to 4,005 on Monday from a peak above 86,000 in early November. Virus cases in Spain are just above 10,000, down from more than 25,000 on Oct. 30. In Italy, there were 16,370 new cases yesterday compared with 40,902 on Nov. 13. The numbers are better in Germany as well, but more volatile. The U.S., on the other hand, is bracing for the worst as test results from Thanksgiving gatherings start to come in.

Yet, despite all of the worries about a second wave, the and hit a record high on Tuesday. With Europe gaining control of its outbreak and moving closer to easing restrictions, the region stands to recover at a faster pace. As a high beta currency, equity market gains and improvement in risk appetite plays a major role in the euro’s rally. If stocks continue to rise, so will the single currency.

Last but certainly not least, 1.20 was a very significant technical level for EUR/USD. We can tell from how quickly and aggressively the pair moved higher once this level was broken that there were many stop orders right above 1.20. In a matter of seconds, EUR/USD jumped more than 20 pips and in less than an hour, it was trading nearly 50 pips higher. The next level of resistance is now the September 2017 high of 1.2093. 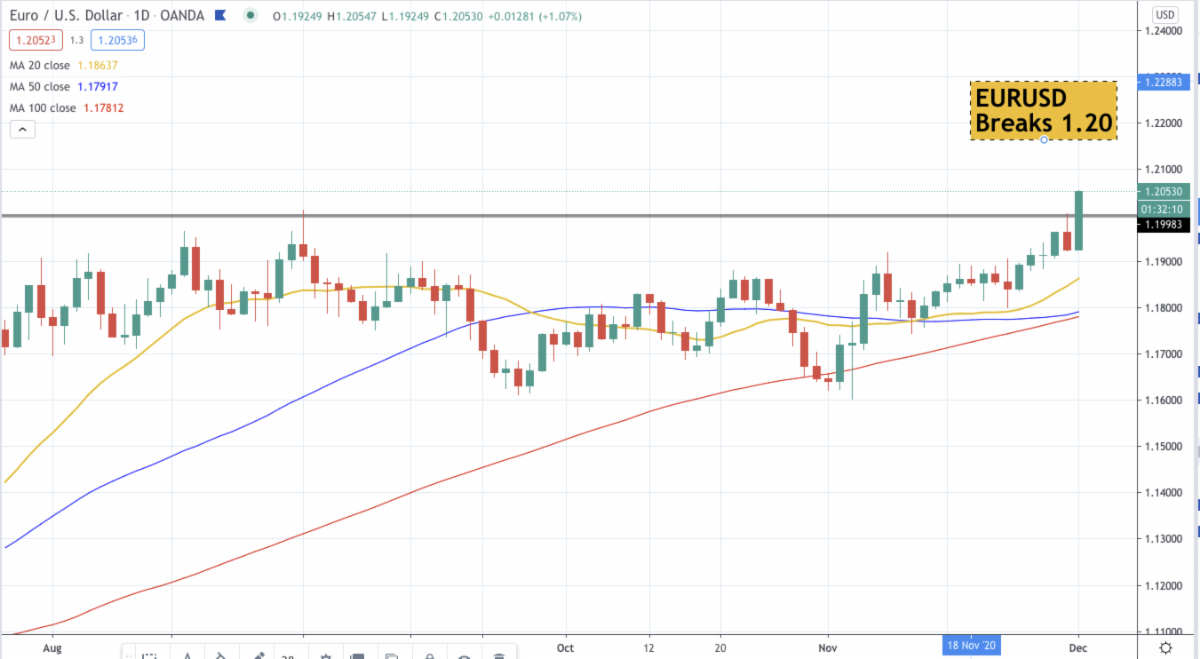